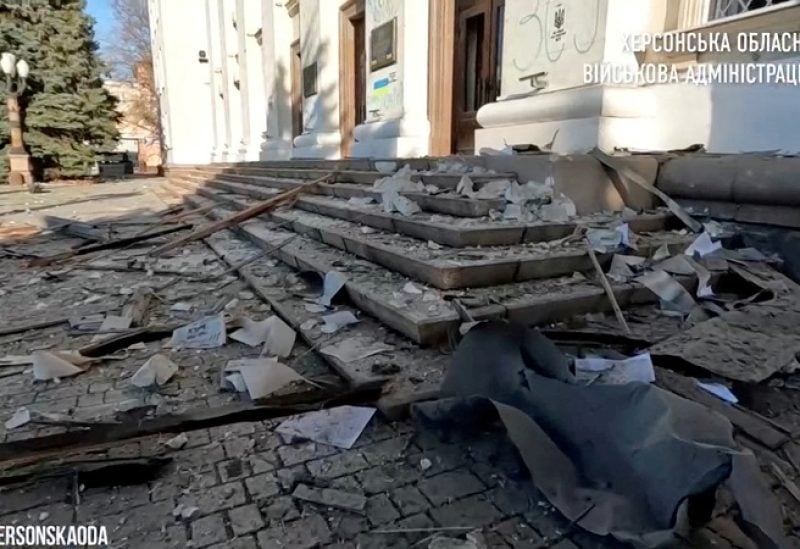 FILE PHOTO: View of the damage at Svobody Square after the landmark Kherson Regional State Administration building was reportedly hit by rocket fire by Russia amid their ongoing invasion in Kherson, Ukraine in this still image from video released December 14, 2022. Ukrainian forces recaptured the city from Russia in November. Kherson Regional State Administration/Handout via REUTERS THIS IMAGE HAS BEEN SUPPLIED BY A THIRD PARTY. NO RESALES. NO ARCHIVES/File Photo

Ukrainians had a grim start to 2023 on Sunday, with yet more sirens and fresh missile attacks on their territory, as the death toll from Russia’s massive New Year Eve assault across the country climbed to at least three.

Night-time shelling that battered parts of the southern city of Kherson killed one person, wounded another and blew out hundreds of windows in a children’s hospital, according to deputy presidential chief of staff Kyrylo Tymoshenko.

Meanwhile, a 22-year-old woman injured in a rocket attack in eastern Khmelnytskyi later died of her wounds, the city’s mayor Oleksandr Symchyshyn said.

Multiple blasts rocked Kyiv and other areas of Ukraine on Saturday and through the night, injuring dozens, a sign that the pace of Russia attacks had picked up.

“Ruining the lives of others is a disgusting habit of our neighbors,” she said.

On Saturday in Kyiv, an AP photographer at the scene of the explosions saw the body of a woman as her husband and son stood nearby. Kyiv Mayor Vitali Klitschko said two schools were also damaged, including a kindergarten.

Some Ukrainians defied the danger, however, to return to the country to reunite with families for the holidays.