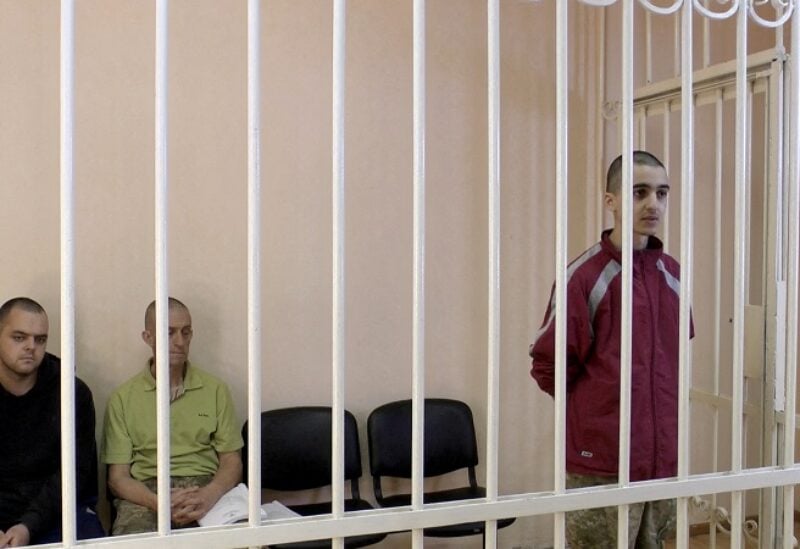 FILE PHOTO: FILE PHOTO: A still image, taken from footage of the Supreme Court of the self-proclaimed Donetsk People's Republic, shows Britons Aiden Aslin, Shaun Pinner and Moroccan Brahim Saadoun captured by Russian forces during a military conflict in Ukraine, in a courtroom cage at a location given as Donetsk, Ukraine, in a still image from a video released June 8, 2022. Video taken June 8, 2022. Supreme Court of Donetsk People's Republic/Handout via REUTERS TV/File Photo

A lawmaker in Ukraine’s parliamentary security and defense committee said on Saturday, that Ukraine is doing everything possible to save three foreign nationals who were sentenced to death by proxy authorities in Donbas for fighting for Ukraine
After being captured, two Britons and a Moroccan were convicted of “mercenary activities” on Thursday by a court in the self-proclaimed Donetsk People’s Republic (DPR), whose separatist leaders are backed by Moscow.
“Both the Defense Ministry and the Main Directorate of Intelligence, which deals with the exchange of prisoners, are taking all necessary measures to ensure these citizens of foreign states … are saved,” lawmaker Fedir Venislavskyi said on national television.
He did not give further details.
Deputy Prime Minister Iryna Vereshchuk said she believed the separatist authorities would ultimately act rationally, “for they are well aware of the irreparable implications for them and for the Russians if they take any wrong steps against these three of our soldiers.”
“Something tells me that, eventually, one way or another, sooner or later, these three servicemen will be exchanged (or otherwise get home),” she said in an online post on Saturday.
Britain has condemned the sentencing of the fighters as an “egregious breach” of the Geneva Convention, under which prisoners of war are entitled to combatant immunity and should not be prosecuted for participation in hostilities.
Ukraine, which has dismissed the Donetsk court’s ruling as having no authority, says the fighters had signed contracts with the Ukrainian armed forces.
As a result, “the status of prisoners of war under international law fully applies to them. We will take all measures to save them,” lawmaker Venislavskyi said