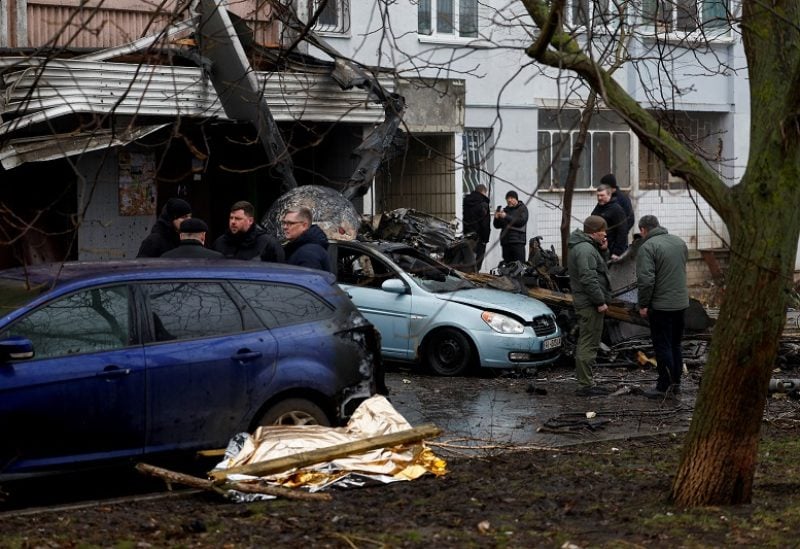 A dead body lies on the ground at the site where a helicopter falls on civil infrastructure buildings, amid Russia's attack on Ukraine, in the town of Brovary, outside Kyiv, Ukraine, January 18, 2023. REUTERS/Valentyn Ogirenko

A helicopter crashed in a suburb outside Kyiv, which led to the killing of Ukraine’s interior minister and other senior officials on Wednesday, the national police chief said.
The helicopter came down near a nursery in the town of Brovary on the capital’s eastern outskirts. Two children were among the dead and 10 were in hospital, officials said
Officials gave no immediate account of the cause of the crash and there was no immediate comment from Russia, which invaded Ukraine last February.
Interior Minister Denys Monastyrsky, responsible for the police and security inside Ukraine, would be the most senior Ukrainian official to die since the war began.
National police chief Ihor Klymenko said Monastyrsky had been killed along with his deputy and other senior ministry officials.
“There were children and…staff in the nursery at the time of this tragedy. Everyone has now been evacuated. There are casualties,” Kyiv region governor Oleksiy Kuleba wrote on Telegram.
Reuters journalists at the scene saw several dead bodies draped in foil blankets in a courtyard near the building damaged by the crash.
Videos shared on social media showed a burning building and people could be heard screaming. Reuters was unable immediately to verify the footage.
“We are finding out information about casualties and the circumstances,” the deputy head of Ukraine’s presidential office, Kyrylo Tymoshenko, wrote on Telegram.