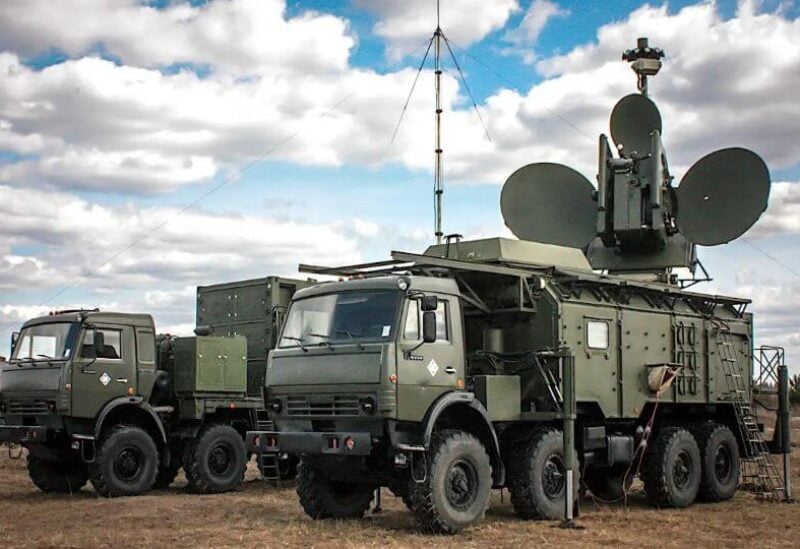 A strange ‘container’ taken by Ukrainian troops today appears to be a big Russian loss as well as a possible intelligence treasure. The containerized command station that Ukraine’s forces discovered appears to be part of the Krasukha-4 mobile electronic warfare system. The Krasukha-4 is primarily intended to detect and jam big radars, such as those found on airborne early warning and control aircraft like the US Air Force’s E-3 Sentry, as well as spy satellites.

This command post container was apparently discovered outside of Kyiv, Ukraine’s capital. Based on a picture that had surfaced online, Twitter user @UAWeapons was one of the first to identify it as most likely being a component of the Krasukha-4 system, also known by the nomenclature 1RL257. A complete Krasukha-4 comprises of two vehicles, one with the electronic warfare (EW) equipment and the other with the command post module, both based on the 8×8 KAMAZ-6350 truck.

There are no indications as to what may have occurred to the truck that was transporting this container or its buddy equipped with the EW system. The container is photographed lying on its side with tree branches on top, although it’s unclear whether this is an intentional attempt to conceal it or simply where it ended up following an attack or accident. There are also more fallen branches and rubbish in the vicinity. The command post module has been damaged, particularly along a section of the bottom edge of the frame, and the access doors on the visible side are missing. That being said, it seems to be in relatively good shape, at least externally.

Regardless, the loss of even half of a Krasukha-4 system might have a substantial operational impact on Russian forces. Despite its late 1990s origins, this is still one of the Russian military’s most capable mobile EW systems, with serial manufacturing only starting in the early 2010s. It was created as part of a larger project to build systems that would protect Russian assets on the ground and in the air from the prying eyes of different ground-based and aerial surveillance and imaging radars, as well as certain radar-equipped intelligence-gathering satellites.

Krasukha-4 can locate and jam several types of radars, including surveillance radars, airborne radar imaging sensors, and active radar seekers and altimeters found in missiles, according to Russian officials. According to the manufacturer, Concern Radio-Electronic Technologies, better known by its Russian acronym KRET, it has a stated maximum range against ground-based and aerial targets of between 150 and 300 kilometers, or around 93 to 186 miles, in any direction, depending on various environmental factors. It’s unclear whether this refers to the detection range, the engagement range, or both.

Placing a Krasukha-4 in the neighborhood of Kyiv would make sense in order to make it more difficult for Ukrainian forces and their foreign partners to locate and target Russian units in the area via radar, where fighting has been happening for weeks. By its very nature, the system must have some passive detection capabilities, which would allow it to be utilized in a broader surveillance role, scanning for potential threats such as a combat jet’s radar or a surface-to-air missile system’s radar. The capabilities of this system are normally not framed as a counter-communications instrument, with Russia’s military employing a range of different electronic warfare devices for that purpose, but it would seem possible that it has some secondary capability in this regard.

Krasukha-4 is also a movable, multi-purpose system that may be moved around quickly depending on the situation on the ground to give crucial EW support in other parts of the country. These technologies could be deployed in parts of Ukraine and Belarus to try to blind foreign manned and unmanned aircraft flying from NATO or international airspace.

Despite the fact that the US military has stopped flying sorites directly over Ukraine, it has maintained to monitor the situation in Ukraine from the air from surrounding locations, as have other NATO countries. This has included operations involving US Air Force and NATO E-3s, as well as Air Force E-8C Joint Surveillance Target Attack Radar System (JSTARS) battlefield management jets and RQ-4 Global Hawk drones, all of which are equipped with sophisticated radars, as detailed here. This is precisely the type of platform Krasukha-4 was designed to combat.

A CNN production team was able to fly on a NATO E-3 on a mission near Poland’s borders with Ukraine and Belarus earlier this month. “The Russians have also taken to trying to jam the NATO plane’s radar, an annoyance but unavoidable given how apparent the large spy plane is,” the publication said at the time, but no details about the source or sources of the interference were provided.

It’s worth emphasizing that, despite Russia’s extensive electronic warfare capabilities, which have been utilized in the past in Ukraine and other nations, the Krasukha-4 appears to have been deployed only rarely in the current conflict. It’s probable that this is due in part to fears of these systems being lost or captured.

Russian military, on the other hand, have taken the same risks by utilizing other rather modern armament systems. For example, the war in Ukraine has revealed that the Iskander-M short-range ballistic missile has an inbuilt disposable countermeasure capability that was previously unknown, at least publicly, and about which you can learn more here. The captured Krasukha-4 command post module and the reported destruction of an R-330ZH Zhitel, a truck-mounted mobile communications jamming device, both indicate that Russia’s military is finally ramping up its employment of EW weapons.

Regardless of the immediate ramifications of the loss of a Krasukha-4 system component, if Ukrainian troops can safely recover this command post module, it might represent a significant source of intelligence to Ukrainian authorities and its international partners. Intelligence services in the United States and other Western countries would definitely love to get their hands on this container to see what information they can gather. Advanced electronic warfare systems, such as those developed and fielded by the Russians and the Chinese, are frequently cited by US military leaders as posing a substantial threat to American forces.

Learning more about the Krasukha-4’s capabilities could aid in the creation of countermeasures, among other things. The software that operates the device could be just as valuable as the hardware, and it could lead to the discovery of security flaws that could be used in cyber warfare.

A more detailed examination of the command post’s individual components, including the wiring’s construction, could reveal additional information, especially regarding Russia’s ability to produce advanced EW systems and other electronics. Any documents or other materials contained within this containerized command post could hold a lot of knowledge on a variety of subjects.

Since the disintegration of the Soviet Union, independent Ukraine has proven to be a significant supply of Soviet-designed weaponry for the US military and intelligence community to sift through as part of so-called foreign material exploitation (FME) programs. This has included acquiring higher-end systems from Ukrainian suppliers, such as fighter jets and huge radars. The US government is reportedly providing Soviet-era air defense equipment to the Ukrainian military from its FME stockpiles to help improve the country’s capabilities to block Russian forces from seizing control of the sky.

It appears feasible, if not likely, that the US has already been attempting to buy various examples of more advanced Russian weapons and other military equipment that have been captured in the conflict thus far, either as a direct part of that transaction or through other negotiations. This fight will almost certainly result in a large trove of intelligence for the US administration and others in general.

With that in mind, it’s plausible that members of the US Intelligence Community, which have been collaborating closely with their Ukrainian counterparts throughout the conflict, are attempting to acquire or otherwise get access to this portion of the Krasukha-4 system. Of course, they could have come upon another case during the Ukraine conflict or through other, unconnected ways.

Overall, capturing this seemingly innocuous metal box by Ukrainian forces might have huge repercussions for the Russian military and be a major boost to Russia’s foes in Ukraine and around the world, including the United States.