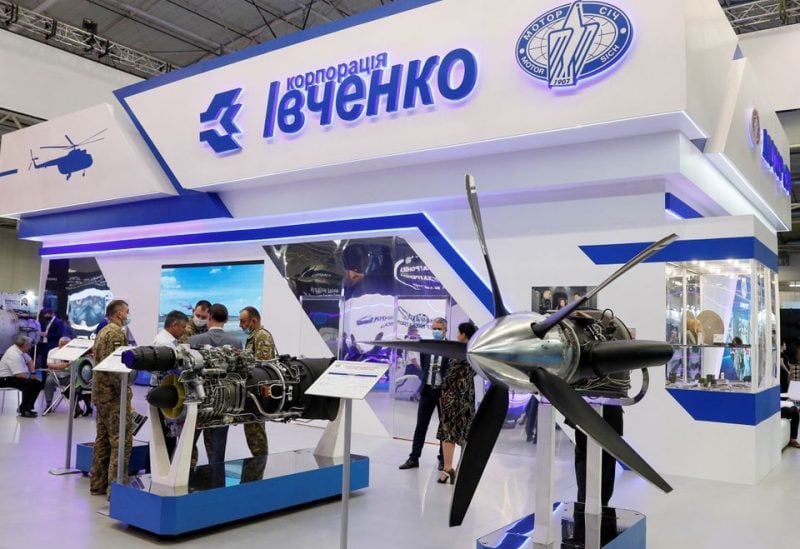 An area of Ukrainian aerospace company Motor Sich and association "Corporation Ivchenko" are seen at the annual exhibition of weaponry and military equipment "Arms and Security 2021" in Kyiv, Ukraine June 15, 2021. REUTERS/Gleb Garanich/File Photo

A former owner of a prestigious aircraft engine producer in central Ukraine has been imprisoned on treason accusations, according to security officials, according to Ukrainian media.

Several Ukrainian news agencies reported that Vyacheslav Boguslaev, the “honorary head” of the Motor Sich firm in Zaporizhzhia’s principal city, had been detained and was being transported to Kyiv in a convoy.

The reports quoted security sources as saying Boguslaev, a former member of parliament, was suspected of collaborating with and assisting Russian forces occupying parts of four Ukrainian regions, including Zaporizhzhia region.

The city of Zaporizhzhia remains under Ukrainian control.

The reports quoted security sources as saying investigators had to break down the front door of Boguslaev’s home in order to conduct a search.

Prominent journalist Iryna Romaliyska, writing on Facebook and also quoting security sources, said Boguslaev was known for his pro-Russian views. He was suspected, she wrote, of supplying Russia with parts for helicopters and planes and of having contacts with Russian special services.

Moror Sich is a well-known manufacturer of aircraft engines and industrial turbines. Ukrainian authorities last year blocked attempts by Chinese companies to take over the firm.