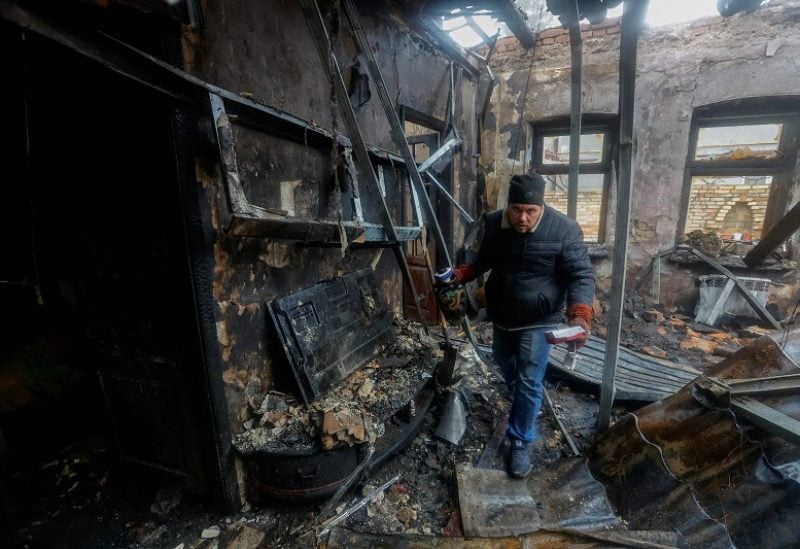 Putting Europe on alert to brace for more refugees, Ukrainian prime minister has appealed for Patriot missile batteries and other high-tech air defense systems to counter Russian attacks that knocked out electricity and water supplies for millions of Ukrainians
Prime Minister Denys Shmyhal told French broadcaster LCI that in addition to making Ukrainians suffer, Russia wants to swamp Europe with a new wave of Ukrainian refugees by continuing to strike power stations and other infrastructure.
Poland’s president said his nation already has seen an increased demand to shelter refugees due to the combination of such attacks coupled with the freezing weather in Ukraine.
“The number of refugees in Poland has risen (recently) to some 3 million. That will probably also mean an increase in their numbers in Germany,” Polish President Andrzej Duda said following talks with German President Frank-Walter Steinmeier in Berlin.
Millions of Ukrainians fled their country after Russia invaded on Feb. 24. Thousands of people have died and dozens of cities and towns across Ukraine have been reduced to rubble during a war now in its 10th month. On Monday, Russia shelling again mostly focused on eastern and southern regions that Russian President Vladimir Putin illegally annexed.
To defend against further strikes, Shmyhal reiterated previous Ukrainian calls for Patriot surface-to-air missiles — a highly sophisticated system. During an interview with LCI that aired Sunday night, he also asked for more German and French air-defense systems, resupplies of artillery shells and modern battle tanks.
Organizers in France expect more than 45 nations and 20 international institutions to take part in a Paris conference starting Tuesday to raise and coordinate aid for Ukraine’s water, power, food, health and transportation needs during the tough winter months.
The provision of Patriot missiles to Ukraine would mark a major advance in the kinds of air defense systems the West is sending to help the country repel Russian aerial attacks. So far, no country has offered them, and such a step would likely mark an escalation in the fight against Russia.
US officials have said they were considering providing Ukraine with Patriot missile batteries. But Brig. Gen. Pat Ryder, the Pentagon’s press secretary, told reporters recently there were no plans to send the complex, high-tech system.
“We’ll continue to have those discussions,” he said. He added, “None of these systems are plug-and-play. You can’t just show up on the battlefield and start using them.”
Air defenses were also a topic of a phone call Ukrainian President Volodymyr Zelensky held Sunday with US President Joe Biden. Zelensky, his office said, told Biden “about 50 percent of the Ukrainian energy infrastructure was destroyed.”
Biden “highlighted how the US is prioritizing efforts to strengthen Ukraine’s air defense through our security assistance, including the Dec. 9 announcement of $275 million in additional ammunition and equipment that included systems to counter the Russian use of unmanned aerial vehicles,” the White House said.
Russian drone attacks near the Black Sea port of Odesa over the weekend destroyed several energy facilities and left all customers except hospitals, maternity homes, boiler plants and pumping stations without power.
The president of the International Committee of the Red Cross, Mirjana Spoljaric, completed a four-day visit to Ukraine, including Odesa, on Monday. She said she “saw how families have been torn apart and how power cuts and freezing temperatures have increased the suffering for too many during this difficult winter.”
The European Union’s foreign ministers gathered Monday in Brussels to discuss fresh sanctions to further punish Russia over its invasion of Ukraine.
Irish Foreign Minister Simon Coveney sharply condemned “deliberate targeting by Russia of civilians in terms of inflicting suffering on a broad population.” He described Russia’s actions as “a crime, in terms of both aggression and a crime against humanity.”
Slovakia said that in cooperation with Germany, it has opened a center to repair Ukrainian arms of Western origin. The center is located inside a military base in the town of Michalovce, some 35 kilometers (22 miles) west of the border with Ukraine, the EU member nation’s Defense Ministry said. Howitzers and air defense systems are among the arms to be fixed there.
In Ukraine, the eastern Donbas, which is made up of Donetsk and Luhansk provinces, again has become a focus of intense fighting, particularly around the city of Bakhmut.
Ukrainian officials said Monday the country’s forces hit a hotel in the Luhansk region that served as a headquarters of the Wagner Group, a private Russian military contractor and mercenary group that has played a prominent role in eastern Ukraine.
The region’s Ukrainian governor, Serhiy Haidai, said hundreds of Russians were killed in the strike on Kadiivka on Sunday. Moscow-backed local officials in Luhansk confirmed that a Ukrainian strike destroyed a hotel building in Kadiivka but claimed it was unused.
The Ukrainian mayor of the southeastern town of Melitopol, Ivan Fedorov, reported that Ukraine also attacked a hotel that reportedly housed analysts from Russia’s top security agency, the FSB. Moscow did not comment on that claim, and none of the reports could be independently confirmed.
Elsewhere on the battlefield, the office of Ukraine’s prosecutor general said Monday that two civilians were killed and 10 were wounded in Russia’s shelling of the town of Hirnyk in the Donetsk region.
“It was yet another Russian attack against civilians,” Donetsk Gov. Pavlo Kyrylenko said on his Telegram messaging app channel.
Kherson Gov. Yaroslav Yanushevych said a Russian strike on the southern city of the same name, which Ukraine reclaimed a month ago, killed two civilians and left five wounded Monday. He said the Russian shelling hit residential buildings and damaged power lines. Yanushevych urged city residents