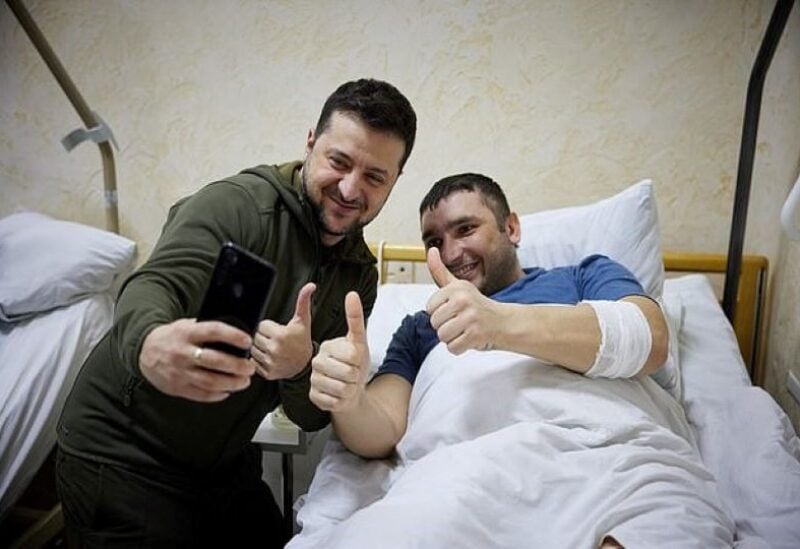 According to a video posted by the Ukrainian Presidential Press Service on Sunday, Zelenskyy paid a visit to wounded soldiers being treated in a military hospital.

Some of the soldiers in the film were claimed to have been wounded in Hostomel and Irpin, two cities where Russian troops were engaged in severe fighting.

Earlier on Sunday, Russian missiles struck a big Ukrainian facility near the NATO member Poland’s border, killing 35 people and wounded 134, according to a local official, in an escalation of the battle to the country’s west while severe fighting was reported elsewhere.

According to a Ukrainian official, a volley of Russian missiles targeted Ukraine’s Yavoriv International Center for Peacekeeping and Security, a center roughly 15 miles (25 kilometers) from the Polish border that had previously housed NATO military instructors, killing 35 people and wounded 134.

Up to 180 “foreign mercenaries” and a big number of foreign weaponry were destroyed, according to Russia’s defense ministry. The casualties reported by both sides could not be independently verified by Reuters.

Ukraine also reported new airstrikes on a western airport, severe shelling in Chernihiv, northeast of the city, and attacks on the southern town of Mykolayiv, where officials said nine people were killed.

Despite the violence, all parties expressed optimism that progress might be made at bilateral discussions, which have been held on a regular basis since Russia invaded on February 24, but they did not specify what would be reached.

On Monday, diplomatic attempts to settle the conflict in Ukraine were ramping up, with Ukrainian and Russian negotiators ready to meet again after both sides declared progress, despite the fact that both sides cited progress.

Fighting erupted elsewhere when Russia struck a base near the Polish border.

The US, which has been watching Russia’s build-up on Ukraine’s borders with increasing concern for weeks, now claims it was a premeditated, unjustifiable, and unconstitutional “war of choice.”

The White House claimed that in a phone chat, US President Joe Biden and French President Emmanuel Macron reaffirmed their determination to holding Russia accountable for the invasion.

According to the State Department, US Secretary of State Antony Blinken and his Ukrainian colleague, Dmytro Kuleba, discussed diplomatic efforts to stop Russia’s incursion.

In a video posted online, Ukrainian negotiator Mykhailo Podolyak claimed, “Russia is already beginning to communicate constructively.” “I believe we will be able to get some outcomes in a matter of days.”

According to the RIA news agency, a Russian participant to the discussions, Leonid Slutsky, said the delegations had made substantial progress and that draft agreements may be reached soon.

Ukraine announced that video conversations will begin at 10:30 a.m. (0830 GMT). Neither party has stated what they intend to cover. Three rounds of negotiations in Belarus, the most recent of which took place last Monday, had mostly focused on humanitarian issues.

The countries’ delegates had been conversing daily by video link, Zelenskyy said, and a stated goal of his negotiators was to “do everything” to arrange for him to to meet Putin.