Ukraine says it is holding out despite intense battles in Soledar 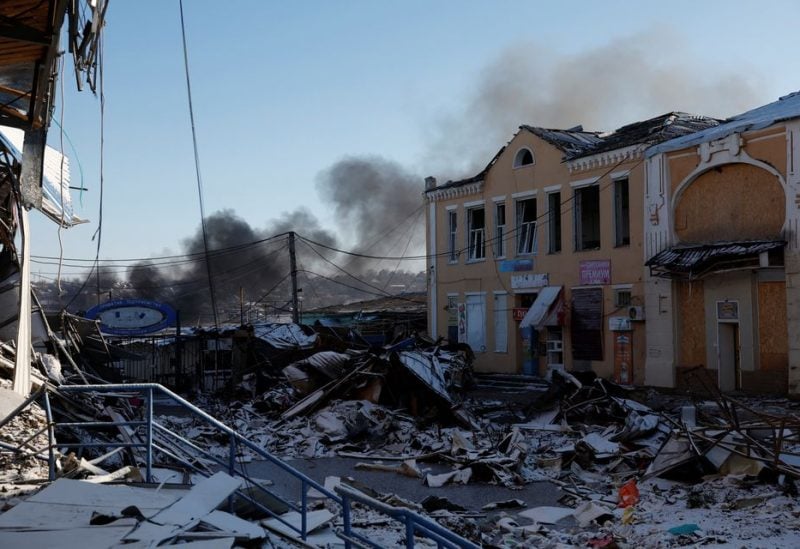 Plumes of smoke rise from a Russian strike during a 36-hour ceasefire over Orthodox Christmas declared by Russian President Vladimir Putin, as Russia's attack on Ukraine continues - REUTERS

Ukraine said on Thursday its troops were still holding out despite heavy fighting on a battlefield covered with bodies in a salt mining town in eastern Ukraine, where Russian mercenaries have claimed Moscow’s first significant gain in half a year.

The ultra-nationalist Russian mercenary group Wagner, run by an ally of President Vladimir Putin outside the normal chain of military command, has claimed to have taken Soledar after days of intense fighting that left it strewn with Ukrainian dead.

Moscow has so far held off proclaiming victory there. Ukraine has acknowledged Russian advances but said on Thursday its own garrison had not withdrawn.

“Fighting is fierce,” Ukrainian Deputy Defense Minister Hanna Malyar said in a briefing on Thursday, adding that the Russians were “moving over their own corpses”. Reuters was unable to independently verify the situation inside Soledar.

Malyar said Russia had increased the number of units in Ukraine to 280 from 250 in the past week as it seeks to gain the strategic initiative.

Kremlin-watchers were trying to digest Russia’s latest shift in battlefield leadership, a day after Valery Gerasimov, the chief of the military’s general staff, was unexpectedly given direct command of the invasion. The previous commander, Sergei Surovikin, was effectively demoted to become one of Gerasimov’s three deputies.

Moscow explained the decision – at least the third abrupt change of command in the 11-month conflict – as a response to the growing importance of the campaign.

Russian and Western commentators alike saw attempts to shift blame for months of setbacks that have seen Russia lose around 40% of the territory it had seized since February.

Chief of staff for more than a decade, Gerasimov had become a target of abuse from nationalist bloggers, many with hundreds of thousands of subscribers, who have flourished even as the Kremlin has shut all independent media and jailed its critics.

“The move is likely to be greeted with extreme displeasure by much of the Russian ultra-nationalist and military blogger community, who have increasingly blamed Gerasimov for the poor execution of the war,” Britain’s Ministry of Defense said.

One prominent Russian military blogger who posts on the Telegram messaging app under the name of Rybar said Surovikin was being made the fall-guy for recent military debacles.

Other analysts wondered if it was Gerasimov who was being set up: “Has Putin and Defence Minister (Sergei) Shoigu finally put in place all the elements to set up Gerasimov as the fall guy for all of Russia’s failures in the war?” tweeted Mick Ryan, a retired Australian major general.

Ukraine’s defense ministry offered mockery: “Every Russian general must receive at least one opportunity to fail in Ukraine,” it tweeted. “Some may be lucky enough to fail twice.”

If Russia succeeds in capturing Soledar, it would be Moscow’s biggest gain since a series of humiliating retreats in the second half of 2022. But military experts say the cost has been disproportionate, after intense battles that littered the freezing mud with bodies.

Soledar had barely 10,000 people before the war, and Russia has failed in repeated attempts to capture the far more important nearby city of Bakhmut, ten times as large.

“Now the terrorist state and its propagandists are trying to pretend that some part of our city of Soledar – a city that was almost completely destroyed by the occupiers – is allegedly some kind of Russia’s achievement,” he said in an overnight address.

On Wednesday, Wagner boss Yevgeny Prigozhin said his forces had captured all of Soledar and killed about 500 Ukrainian troops after heavy fighting, but the Kremlin was more cautious.

Donetsk governor Pavlo Kyrylenko told Ukrainian state TV that 559 civilians remained in Soledar, including 15 children, and could not be evacuated with fighting continuing.

Across Ukraine, the front lines have barely budged since Russia’s last big retreat in the south two months ago.

Kyiv, which says it aims to drive out all Russian troops this year, is hoping the arrival of heavy armor from Western allies will allow it to resume advances in coming months.

Last week, the United States, Germany and France for the first time pledged to supply armored fighting vehicles. This week, the focus has shifted to main battle tanks, potentially a dramatic shift in Ukraine’s capabilities.

Polish President Andrzej Duda, who received a hero’s welcome on the streets of the Ukrainian city of Lviv on Wednesday, broke a taboo by promising to deliver the first company of 14 German-made Leopard tanks, as part of what he described as an international coalition.

However, that requires permission from Germany, which says weapons deliveries must be coordinated and added on Wednesday that it was not aware of any requests from its allies to send Leopards to Ukraine. Britain has said it is considering sending tanks.

Putin sent tens of thousands of troops into Ukraine on Feb. 24, saying Kyiv’s close ties with the West threatened Russia’s security. Kyiv and its allies call it an unprovoked war to seize territory.