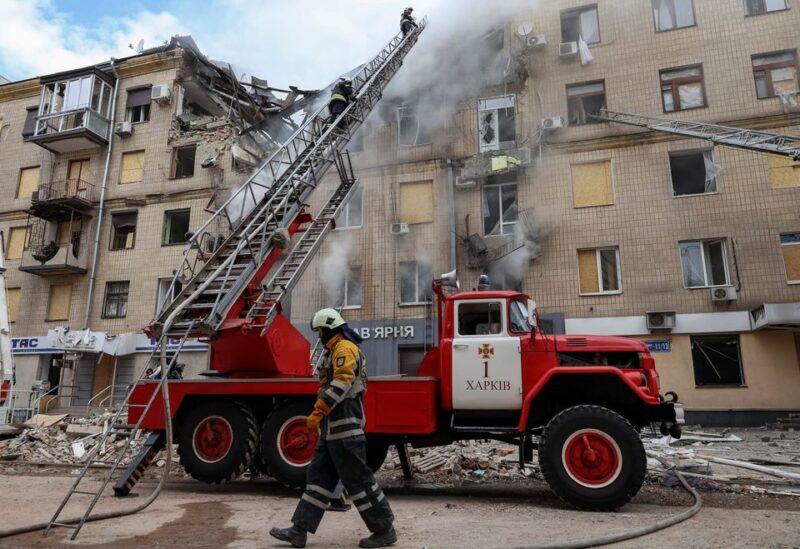 Firefighters work at the site of a residential building hit by a Russian military strike, amid Russia's attack on Ukraine, in Kharkiv, Ukraine September 6, 2022. REUTERS/Sofiia Gatilova/File Photo

As U.S. Secretary of State Antony Blinken paid a visit to the capital, Kyiv, and pledged additional aid, Ukraine hailed a lightning counteroffensive that it claimed had recaptured large portions of its territory in the east and south.

Volodymyr Zelenskiy, the president of Ukraine, claimed in a video speech on Thursday that since September 1 Ukrainian forces had “liberated dozens of settlements” and had taken back 1,000 square kilometers (385 square miles) of territory in the east and south.

Zelenskiy also posted a video in which Ukrainian soldiers said they had captured the eastern town of Balakliia near Kharkiv, the second largest city in Ukraine. Video posted to a Ukrainian news aggregator appeared to show the Russians had left behind trucks, artillery and ammunition.

Vitaly Ganchev, a pro-Russian official, told Russian state television that Russian forces had fought off a Ukrainian attempt to encircle and capture Balakliia, which he said remained in Russian hands.

Earlier, Ukrainian Brigadier General Oleksiy Gromov said troops had advanced up to 50 km (30 miles) behind Russian lines and recaptured more than 20 villages in the Kharkiv region.

The Ukrainian military said early on Friday Russian forces were trying to evacuate wounded personnel and damaged military equipment in the areas of Vilkhuvatka village, southwest of Kharkiv, and Borodoyarske, to the southeast.

Blinken said Ukrainian forces were making progress and he pledged U.S. support for “as long as it takes”.

“We did get a comprehensive update on the counteroffensive and, again, it’s very early but we’re seeing clear and real progress on the ground, particularly around Kherson, but also some interesting developments in the Donbas in the east,” Blinken told reporters before leaving Kyiv.

If the gains are confirmed and held, they would be a serious blow for Russia, which Western intelligence services say has suffered huge casualties.

The gains would also represent a big boost for Ukraine, which is keen to show its Western backers that it can turn the tide in the conflict and deserves more of their support.

This week’s surprise counteroffensive in the Kharkiv region saw Ukrainian forces make a sudden and deep thrust behind Russian lines.

Ukraine has for weeks been talking about a big counteroffensive in the south around Kherson. Western military analysts believe Russia may have left itself exposed in other areas as it rushed to reinforce the south.

“In principle, this is a huge success. We found a weak spot where the enemy wasn’t ready,” he said in a video posted on YouTube.

Arestovych said Ukraine’s campaign in Kherson was advancing more slowly than in the Kharkiv region. But the eastern drive was “methodical and organised”. He said Kyiv’s forces were well placed to regain more Kharkiv towns.

Russia’s state news agency RIA quoted Russian-appointed Kherson authorities as saying some Ukrainian troops were captured during the counterattack and an undisclosed number of Polish tanks they were using had been destroyed.

Blinken announced $2.2 billion in new military financing to Ukraine and 18 other countries deemed to be at risk of Russian aggression. Approximately $1 billion will go to Ukraine. The United States also announced a separate $675 million in weapons to the country.

The Kharkiv region borders Russia and its main city, Kharkiv, has for months been struck by Russian missiles after its forces failed to capture it in the early stages of its Feb. 24 invasion.

“We are scared … You can’t get used to it, never,” resident Olena Rudenko told Reuters.

Ukraine is under pressure to demonstrate progress on the ground before winter sets in, amid threats by Russian President Vladimir Putin to halt all energy shipments to Europe if Brussels goes ahead with a proposal to cap the price of Russian gas.

Russia has confirmed fighting in the Kharkiv region but has not confirmed any territorial losses, though unverified social media accounts run by Russian military experts have suggested Russia did suffer setbacks and would need to reinforce.

Heavy fighting was also reported on Thursday in areas near the Russian-held Zaporizhzhia nuclear power station in southern Ukraine after Kyiv warned it might have to shut down the plant to avoid disaster.

Putin said on Wednesday that Russia would not lose what he calls its “special military operation” in Ukraine, an exercise he has described as an attempt to preemptively protect his country’s security against an expanding NATO, the Western military alliance.