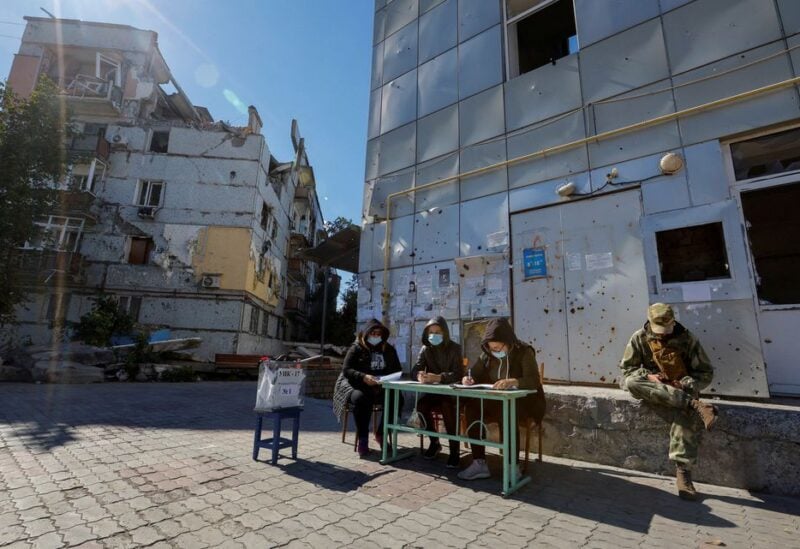 Members of an electoral commission wait for voters near a destroyed residential building on the third day of a referendum on the joining of the self-proclaimed Donetsk People's Republic (DPR) to Russia, in Mariupol, Ukraine September 25, 2022. REUTERS

Russian-installed officials in four seized areas of Ukraine announced massive majorities in favor of joining Russia, even as the US prepared a U.N. resolution denouncing the referendums as shams and Russia remained steadfast.

The US is also planning a fresh wave of penalties on Russia if it annexes Ukrainian land, as well as a $1.1 billion armament package for Ukraine, which will be disclosed soon, according to US sources.

U.S. Secretary of State Antony J. Blinken said the United States and its allies remained committed to European energy security, after Germany, Sweden and Denmark said attacks caused major leaks from two Russian energy pipelines. It remained far from clear who might be behind the leaks.

Hastily arranged votes took place over five days in the eastern regions of Donetsk and Luhansk, and in Zaporizhzhia and Kherson to the south, that together make up about 15% of Ukrainian territory.

Vote tallies from complete results on Tuesday in the four provinces ranged from 87% to 99.2% in favour of joining Russia, according to Russia-appointed officials. The head of the upper house of the Russian parliament said the chamber might consider annexation on Oct. 4.

“The results are clear. Welcome home, to Russia!,” Dmitry Medvedev, a former president who serves as deputy chairman of Russia’s Security Council and an ally of President Vladimir Putin, said on Telegram.

If Russia annexes the four Ukrainian regions, Putin could portray any Ukrainian attempt to recapture them as an attack on Russia itself.

Putin said last week he was willing to use nuclear weapons to defend the “territorial integrity” of Russia.

But Mykhailo Podolyak, an adviser to Zelenskiy, told Reuters that Kyiv would not be swayed by nuclear threats or by the annexation votes, and would press on with plans to retake all territory occupied by invading Russian forces.

He said Ukrainians who helped organize the referendums would face treason charges and at least five years in jail. Ukrainians who were forced to vote would not be punished.