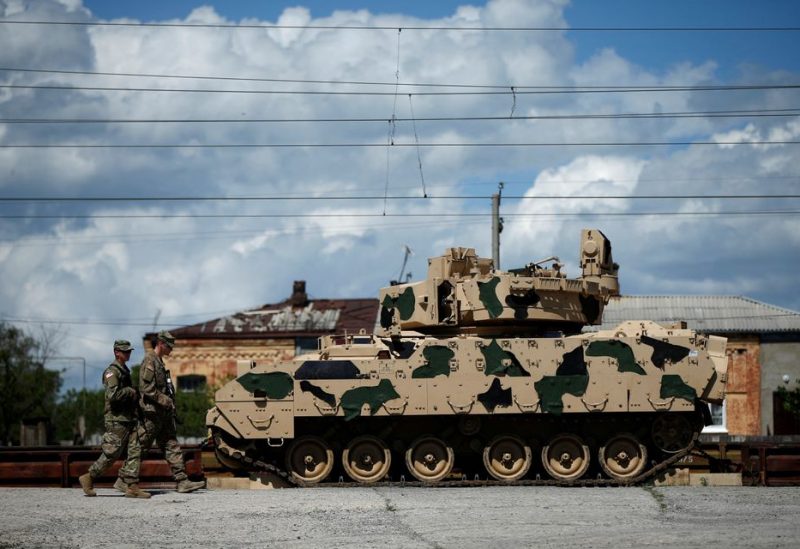 U.S. servicemen walk past a Bradley infantry fighting vehicle as they arrive for the joint U.S.-Georgian exercise Noble Partner 2016 in Vaziani, Georgia, May 5, 2016. REUTERS/David Mdzinarishvili

Western allies moved toward supplying Ukraine with armored battle vehicles but not the heavier tanks it has requested to fight Russia, while Washington predicted months of intense fighting on the eastern frontline.

While the official said these would be the first Western armoured vehicles delivered to Ukraine, Australia has given Kyiv 90 of its Bushmaster vehicles, an armoured unit hardened against landmines and other threats.

U.S. President Joe Biden said later on Wednesday that Washington was considering sending Bradley Fighting Vehicles to Ukraine, which is fighting Europe’s biggest land conflict since 1945. Cities have been destroyed, millions of people displaced and tens of thousands killed since Russia’s invasion in February.

The Bradley armoured vehicle, which has a powerful gun, has been a U.S. Army staple to carry troops around battlefields since the mid-1980s. The U.S. Army has thousands of Bradleys, and they would give Ukraine more firepower on the battlefield and strengthen its ability in trench warfare.

Biden’s move, however, would fall short of sending the Abrams tanks that Ukraine has sought. Kyiv has repeatedly asked Western allies for heavier fighting vehicles such as the Abrams and German-made Leopard tanks.

In an evening video address, Zelenskiy thanked Macron for the announcement and said it showed the need for other allies to provide heavier weapons.

“This is something that sends a clear signal to all our partners. There is no rational reason why Ukraine has not yet been supplied with Western tanks,” he said.

A senior U.S. administration official on Wednesday gave a sobering assessment of fighting in Ukraine’s eastern Donetsk region, especially around the largely ruined, Ukrainian-held city of Bakhmut. Fierce combat is likely to persist for the foreseeable future, although Russian forces have made incremental progress, the official said.

“The fighting is still quite hot … I think what we’re seeing in Bakhmut we should expect to see elsewhere along the front that there will be continued fighting in the coming months.”

In his video address, Zelenskiy said Ukrainian troops outside Bakhmut were inflicting numerous losses on the Russians and said Moscow was building up its forces in the region.

Major General Kyrylo Budanov, chief of the Military Intelligence of Ukraine, told ABC News that he expected more strikes “deeper and deeper” inside Russia, without saying whether Ukrainian forces would be responsible.

Budanov said he had been “glad to see” the Dec. 26 attack on Russia’s Engels air base, hundreds of miles from the Ukraine’s border.

Asked whether attacks on Crimea, the peninsula annexed by Russia in 2014, Budanov said: “Crimea is part of Ukraine, it’s part of our territory. We can use any weapon on our territory.”

The United States is preparing another weapons aid package which could be announced in the coming days on top of about $21.3 billion in security assistance so far to Ukraine.

The United States has increased the capability of the weapons it has sent including shoulder-fired Stinger anti-aircraft missiles as well as Javelin anti-tank missiles, the HIMARS rocket system and NASAMS surface-to-air missiles.

In a signal to the West that Russia will not back down over Ukraine, Russian President Vladimir Putin sent a frigate on Wednesday to the Atlantic Ocean armed with new generation hypersonic cruise missiles, which can travel at more than five times the speed of sound.

Ukraine said Russia had launched seven missile strikes, 18 air strikes and more than 85 attacks from multiple-launch rocket systems in the past 24 hours on civilian infrastructure in the cities of Kramatorsk, Zaporizhzhia and Kherson.

Ukrainian Deputy Defence Minister Hanna Malyar said Russia would continue to form additional assault units and focus on the capture of Bakhmut and other cities to the north of Donetsk.

Malyar, citing the ministry’s main intelligence directorate, wrote on the Telegram messaging app that significant Russian losses meant Moscow would most likely have to announce a second partial mobilisation in the first quarter of the year.

Russia launched what it calls a “special military operation” in Ukraine on Feb. 24, citing threats to its own security and a need to protect Russian speakers. Ukraine and its allies accuse Russia of an unprovoked war to seize territory.