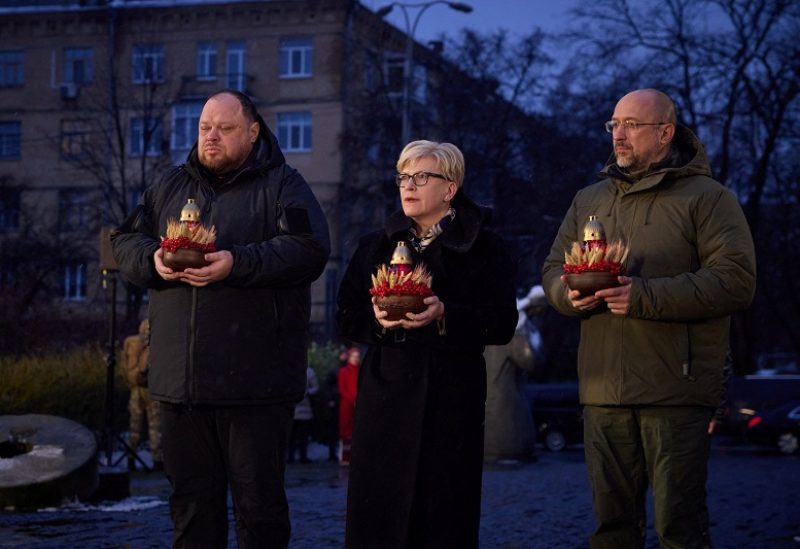 Lithuanian Prime Minister Ingrida Simonyte, Ukrainian Prime Minister Denys Shmyhal and Parliament Speaker Ruslan Stefanchuk visit a monument to Holodomor victims during a commemoration ceremony of the famine of 1932-33, in which millions died of hunger, amid Russia's attack on Ukraine, in Kyiv, Ukraine November 26, 2022. Ukrainian Presidential Press Service/Handout via REUTERS ATTENTION EDITORS - THIS IMAGE HAS BEEN SUPPLIED BY A THIRD PARTY.

The Ukrainian government will impose significant restrictions on electricity consumption throughout the country this winter, said Ukraine’s prime minister said on Sunday.

“After eight waves of missile attacks on the country, all thermal and hydroelectric power stations are damaged, and 40% of the high-voltage network facilities are damaged to varying degrees,” said Denys Shmyhal on Facebook.

Consequently, he warned, “there remains a significant power deficit in Ukraine’s energy system.

“Each of us must realize that we will go through this winter with significant restrictions on electricity consumption,” Shmyhal said.

He said the government instructed the Energy Ministry to determine and submit for consideration clear priorities for restoring electrical service, noting that the first on the list will be critical infrastructure facilities and hospitals.