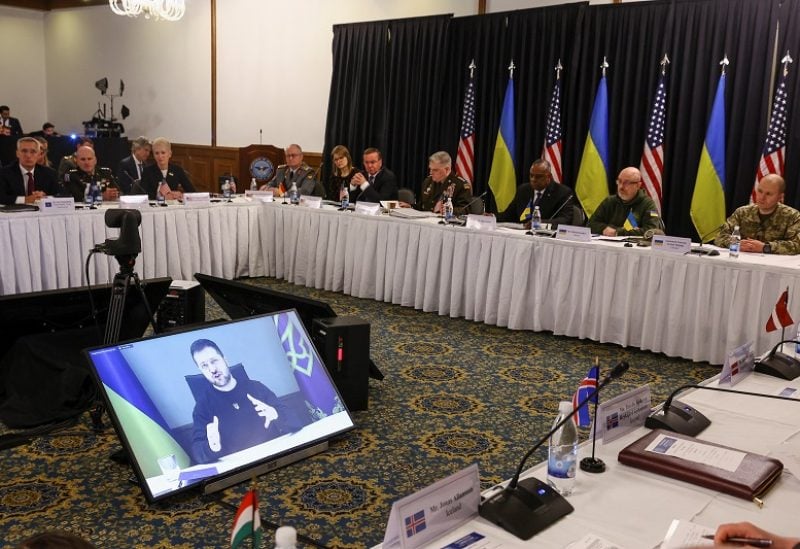 With the provision of powerful battle tanks high on the agenda, in talks at a US air base in western Germany on Friday, Defense ministers and senior military officers from around the world are weighing how best to support Ukraine.

US Defense Secretary Lloyd Austin invited the members of the Ukraine Contact Group to the conference at Ramstein, the largest US air base outside the United States, and urged them to “dig deeper” into their stocks to supply Ukraine with the weapons it needs to repel Russia’s invasion.

Representatives from states that are not members of NATO are also present, as they were in the past two meetings at Ramstein.

Pressure is mounting on Germany to send its Leopard 2 battle tanks to help Ukraine fight off the Russian invasion and to allow its allies to do so as well.

Berlin has so far refused to act unilaterally, insisting that it can only do so in concert with its allies, though domestically and abroad calls are growing louder to provide more modern and heavier weapons to Ukraine.
CIA Director William Burns met with Ukrainian President Volodymyr Zelenskyy late last week in Kyiv to discuss what he believes Russia is planning in the weeks and months ahead, The Washington Post and other outlets reported.

A US official told the paper, “Director Burns traveled to Kyiv where he met with Ukrainian intelligence counterparts as well as President Zelenskyy and reinforced our continued support for Ukraine in its defense against Russian aggression.”

Burns, a former ambassador to Russia, stressed “the urgency of the moment on the battlefield” but communicated that “at some point assistance would be harder to come by.”
Sources told the paper that Zelenskyy and his aides had the impression from the talks that the US administration still strongly supports the $45 billion (€41.5 billion) in emergency funding passed by Congress in December.

That funding expected to last through July or August.

“I do not rule out that we are ready to take such a step,” Pawel Jablonski told radio station RMF FM. Jablonski was referring to the possibility of sending tanks to Ukraine even if Germany opposes it.

He said he hoped Poland would encourage Berlin “also to do so themselves.”

On Wednesday, Polish Prime Minister Mateusz Morawiecki suggested Warsaw could send Leopard 2 tanks to Ukraine as part of a wider coalition, should Germany fail to give its approval.

Finland to send heavy artillery to Ukraine
Finland announced a new donation of more than €400 million euros ($434 million) worth of defense equipment for Ukraine, not including Leopard 2 heavy tanks, which it said it could also send if there is an agreement with allies.

It is the Nordic country’s twelfth package of defense materiel to Ukraine. The previous 11 aid packages had a combined value of €190 million.

Miika Pynnonen, special adviser to Finland’s defense minister, said a decision on donating Leopard 2 tanks, of which Finland has some 200, would be taken separately, following discussions with allies at Ramstein air base in Germany.

Finland had earlier indicated it could send the German-made Leopard tanks if there were an agreement among allies.

The ministry also said Finland would sign a so-called statement of intent with Sweden on support for Ukraine to make sure the aid “would not endanger the national defense of the two countries.”

“Finland supplies defense materiel to Ukraine, and Sweden expresses its readiness to support Finland as necessary,” the statement said.
Ukraine said it had detained seven “Russian agents” suspected of handing coordinates to Moscow’s forces to carry out strikes in the city of Dnipro, where dozens of civilians were recently killed in a missile attack.

“The detainees gave the Russians the coordinates of critical infrastructure facilities,” Ukraine’s security services said in a statement.

“Information about the possible involvement of the detainees in the Russian missile attack on a residential building in Dnipro on January 14, 2023 is currently being checked,” the statement added.

Russian Wagner group officially registers as ‘consultancy’
In its latest intelligence report, the UK Ministry of Defense said the Russian mercenary Wagner group formally registered in Russia as a legal entity, marking a new development in the history a traditionally secretive group.

Wagner now commands up to 50,000 fighters in Ukraine and has become “a key component” in Russia’s war against its neighbor, the UK ministry said.

Wagner cited its business activities as “management consultancy,” in the filing, which was made on December 27. No mention of its paramilitary activities appeared.

It is not clear to what extent the registration would be used to manage the group’s mercenary activities. Private security and military companies are technically illegal in Russia.

Ukrainians wrap up landmine clearance exercises in Cambodia
A group of 15 Ukrainian deminers wrapped up a week of training in Cambodia, where experts who have cleared minefields from one of the most mined countries on the planet shared their expertise with the relative newcomers to the dangerous job.

Oum Phumro, deputy secretary general of the Cambodian Mine Action Center said the training will continue with regular video conference calls and a team of three to five Cambodian experts will travel to Poland in April to train more Ukrainians.

He also said Cambodia was giving Ukraine experienced sniffer dogs and training them on how to use them to detect mines.

Cambodia is still strewn with mines from three decades of war and internal conflicts that ended in 1998, while the conflict in Ukraine is a new one since the Russian invasion last year.

“We are in the midst of war to rebuild Ukraine into a free, independent Ukraine,” she said on Thursday. The visit was kept secret until Friday morning for security reasons.

The additional millions in aid for Ukrainian municipalities is to go toward heating, electricity generators, medical care and administrative costs.
In 2022, the German Development Ministry (BMZ) provided Ukraine with around €600 million in aid.

Schulze was on her second visit to Ukraine since the Russian invasion in February last year, after making a trip to Kiev at the end of May. She was accompanied by Ukrainian Deputy Prime Minister and Infrastructure Minister Olexandr Kubrakov.

Nearly one-fifth of Western companies remaining in Russia are German
Despite widespread outrage over Russia’s war against Ukraine, fewer Western companies than many would believe have actually left Russia, according to a Swiss study.

Politico reported that researchers at the University of St. Gallen and at the IMD institute in Lausanne in Switzerland found that less than 10% of companies from the EU and G7 nations with Russian subsidiaries had divested.

When Moscow launched its invasion, 1,404 companies based in the EU and the G7 counted a total of 2,405 subsidiaries that were active in Russia, the study showed.

By late November, only 120, or about 8.5% of those companies, had divested at least one subsidiary in Russia. There were more confirmed exits from US-headquartered companies than firms based in Europe and Japan.

Fewer than 18% of the US subsidiaries operating in Russia were completely divested in after last year’s February 24 invasion. By contrast, 15% of Japanese firms and only 8.3% of EU firms had divested from Russia, it said.