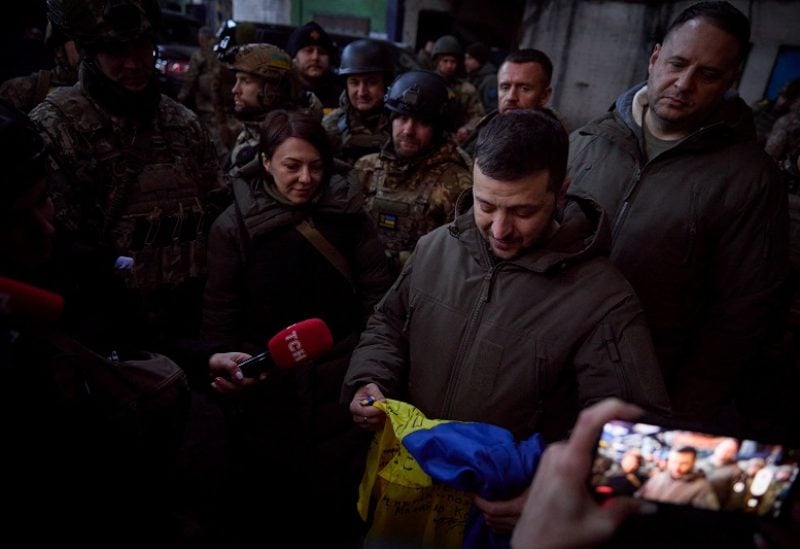 Ukraine's President Volodymyr Zelenskiy holds a national flag as he visits a position of Ukrainian service members in the frontline town of Bakhmut, amid Russia's attack on Ukraine, in Donetsk region, Ukraine December 20, 2022. Ukrainian Presidential Press Service/Handout via REUTERS ATTENTION EDITORS - THIS IMAGE HAS BEEN SUPPLIED BY A THIRD PARTY.

Ukrainian President Volodymyr Zelenskyy visited the besieged city of Bakhmut on Tuesday, his office reportred. The city in eastern Ukraine has been at the center of months of fighting between Russian and Ukrainian forces.
Zelenskyy’s office said he met military officials and handed out awards to Ukrainian servicemen, who have been holding back a fierce Russian military campaign for the city.
Bakhmut has remained in Ukrainian hands during the almost 10-month war, thwarting Moscow’s goal of capturing the Donetsk region.
Taking Bakhmut would rupture Ukraine’s supply lines and open a route for Russian forces to press on toward Kramatorsk and Sloviansk, which are key Ukrainian strongholds in the province.
Mercenaries from the Wagner Group, a shadowy Russian private military company, are reorted to be leading the charge in Bakhmut.
Here are the other main headlines from the war in Ukraine on Tuesday, December 20:
100,000 computer specialists left Russia
Around 100,000 Russian information technology specialists have left their homeland since Moscow’s invasion of Ukraine began.
“In fact, if we look at both waves of departures, up to 10% of employees of IT companies have left the country and have not come back,” Russia’s Digitalization Minister Maxut Shadayev said.
However, he said that 80% of those people are still employed by Russian companies and that he was against banning these Russians from working from their current locations.
A first wave of emigration occurred shortly after Russian President Vladimir Putin’s declaration of war in February; a second after he ordered a partial mobilization of reserve troops in Russia.
The government and parliament are now discussing a law that would prohibit expatriates from continuing to work for Russian companies.
Blast hits Russia-Ukraine gas export pipeline
A blast has ripped through the Urengoi-Pomary-Uzhhorod gas exporting pipeline, which leads from Russia through Ukraine, Russian news media reported.
The regional Emergency Ministry in Russia’s Chuvash Republic where the accident took place, near the Volga city of Kazan, said it had received a call about a fire at a gas pipeline, without naming the pipeline.
It said that, according to preliminary information, no one has been injured in the incident.
The pipeline, which brings gas to Europe from Russia’s Arctic, was built in the 1980s. It enters Ukraine via the Sudzha metering point, currently the main route for Russian gas to reach Europe.
Germany slams Iran over drones for Russia
Germany has criticized Iranian arms deliveries to Russia and objects to the supplying of weapons that have aided Moscow, prolonged the conflict and caused more harm on Ukraine.
Antje Leendertse, Germany’s ambassador to the UN, told the United Nations Security Council, “Iranian combat drones have given Russia additional means to attack civilian infrastructure and terrorize Ukrainian civilians.”
Leendertse urged the council to heed Kyiv’s pleas to investigate Tehran’s role in the conflict.
The United States has accused UN Secretary-General Antonio Guterres of “apparently yielding to Russian threats” by not sending officials to Ukraine to inspect loitering munitions debris collected by the Ukrainians.
Russia has denied its forces have used drones supplied by Iran and said, as a result, there is no mandate for the UN to send investigators to Ukraine.
Iran has acknowledged it had supplied Moscow with such flying robots, but said they were delivered before Russia’s invasion of Ukraine, which got underway on February 24.
UN chief Guterres said the accusation that Iran had supplied Russia with drones used in Ukraine was being looked at “in the broader picture of everything we are doing in the context of the war to determine if and when we should” send officials to investigate.
Russian President Vladimir Putin said the situation in four territories of Ukraine that Russia claims to have annexed was “extremely difficult.”
“The situation in the Donetsk and Luhansk People’s Republics, in the Kherson and Zaporizhzhia regions is extremely difficult,” Putin told the Russian security services on their professional holiday.

“It is necessary to strictly suppress the actions of foreign intelligence services, to quickly identify traitors, spies and saboteurs,” he added.

Putin in September announced the Russian annexation of four territories in the east and south of Ukraine after Moscow proxies held referendums there. The annexations contrevent international law and have been denounced as a sham by Kyiv and the West.