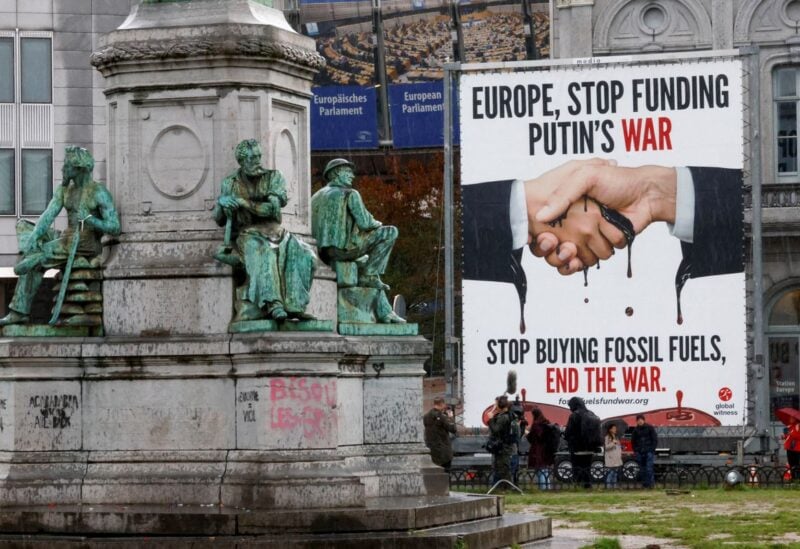 Activists and members of the media stand next to an unveiled billboard reading "Europe, Stop Funding Putin's War" outside the European Parliament in Brussels, Belgium September 27, 2022. REUTERS/Yves Herman/File Photo

In order to reduce money flows to Moscow for its war on Ukraine, European Union countries must stop insuring Russian seaborne oil in the coming days, according to a senior economic adviser to Ukrainian President Volodymyr Zelenskiy.

Oleg Ustenko said as the European Union’s executive European Commission is set to make its proposal on the next package of sanctions against Russia to the EU 27 member states’ national envoys gathering in Brussels later in the day.

EU countries need unanimity to impose sanctions and Hungary – where Prime Minister Viktor Orban cultivates close ties with Russian President Vladimir Putin – has been their loudest critic inside the bloc, which is split on the oil price cap.

“The main goal is to cut off Putin’s regime from any sorts of revenue from fossil fuels,” Ustenko told reporters, adding the oil price cap meant to match that already agreed by the G7 most industrialised countries was “extremely important” and should be approved as soon as possible.

“If you are doing nothing it means you are just prolonging this war with Ukraine, this is just ridiculous, the whole civilised world has to be united on that.”

While the EU already agreed to stop importing Russian oil starting later this year, Ustenko said the “blood money” would keep on flowing to Moscow unless European companies are banned from insuring seaborne shipments.

He hoped Hungary would eventually change tack, and that the shipping EU countries Greece, Malta and Cyprus would also be on board with further measures hitting Russian oil revenues.

“A friend in need is a friend indeed,” he said.

The EU was spurred into action after Putin announced partial military mobilisation last week for his war in Ukraine and issued a nuclear threat to the West.

On Wednesday, Moscow was poised to annex a swath of Ukraine

217 days after invading by land, air and sea the country, which used to be a Soviet republic under Russian rule but now wants to join the European Union and integrate with the West.