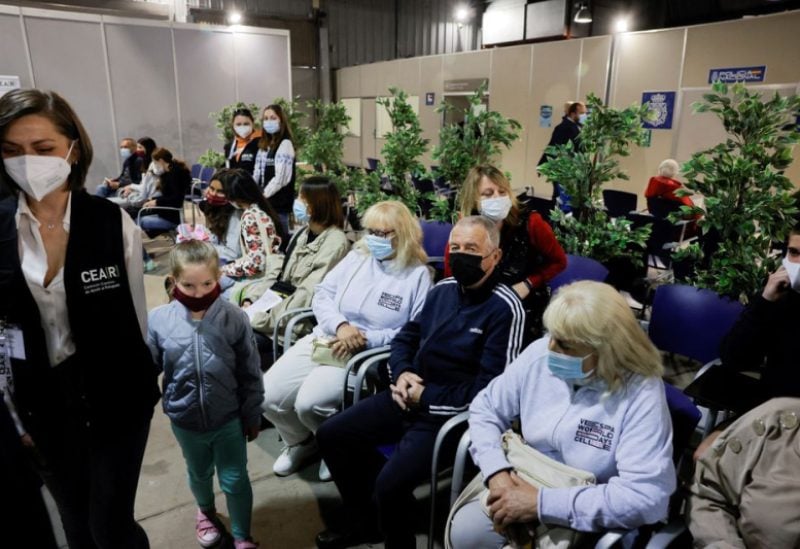 Ukrainian families sit as they are helped by members of the Spanish Commission for Refugee Aid (CEAR) after they arrived as refugees to Spain from Ukraine, at a Ukrainian refugees reception centre in Malaga, southern Spain, April 20, 2022. REUTERS/Jon Nazca

Ukrain adviced refugees who fled in the wake of Russia’s invasion of Ukraine, to stay abroad this winter due to blackouts created by Moscow’s bombardment of critical energy infrastructure.
In an interview broadcast on Ukrainian national television on Tuesday, Deputy Prime Minister Iryna Vereshchuk told Ukrainians currently sheltering abroad that they should wait until spring before returning to Ukraine.
“I wanted to ask (them) not to return. We need to survive the winter,” she said.
Since Oct. 10, Russia has launched waves of missile and drone strikes targeting Ukraine’s energy infrastructure. Kyiv says they have damaged up to 40 percent of the power system.
A local official in Kyiv, the capital, warned last week that residents needed to be prepared for possible disconnections lasting days or even weeks.
The strikes on Ukraine’s infrastructure come against a backdrop of soaring energy, food and other prices in Europe, where most of the millions of refugees who fled Ukraine following Russia’s Feb. 24 invasion sought shelter.
This poses a problem for refugees, many of whom have struggled to find well-paid, permanent jobs in their new countries of residence.
Vereshchuk said the grid “won’t survive” the return of refugees from abroad, and that the situation would “only get worse.”
“To return now is to risk yourself and your children, your vulnerable relatives,” she said.