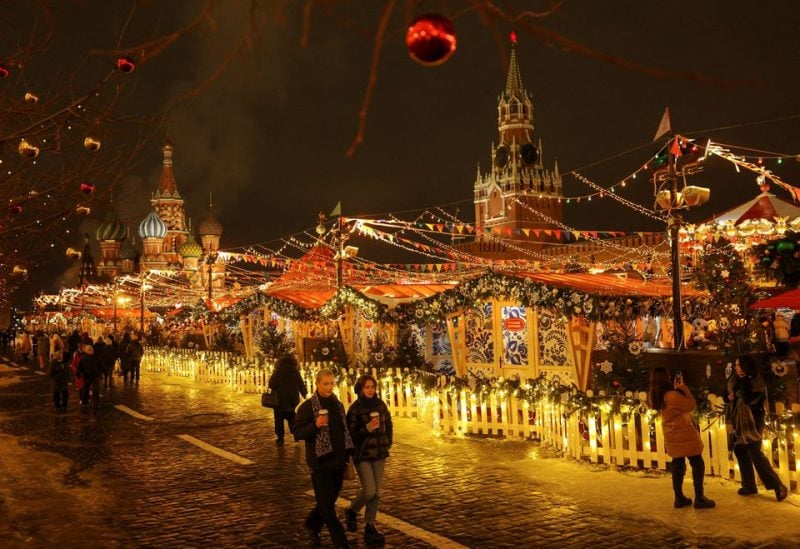 The Christmas markets are in full swing, and visitors to Gorky Park are greeted by gleaming ice sculptures, but some Muscovites admit they are struggling to feel festive ahead of traditional New Year’s celebrations.

Some people said they were noticing a scarcity of Western goods this year while shopping for food and gifts on the streets of the capital.

Asked if the 10-month conflict in Ukraine was affecting her mood, one woman, Maria, replied without hesitation.

“Directly. Yes. It is difficult to be cheerful when you understand that people out there are going through such awful times,” she said on a visit to Gorky Park one recent evening.

“To be honest with you, there is always hope that things will improve, but it seems like it won’t get better,” she added with a rueful smile.

Ivan, a man interviewed nearby, referred obliquely to the conflict but said he would still celebrate.

“A holiday remains a holiday. Even though some of our comrades are doing things somewhere I would rather they would not be doing, this is still a holiday for children, for grandparents. And it should remain so,” he said.

This year, reminders of the Ukraine conflict are inescapable. The Latin letters Z, V and O – symbols adopted by the Russian military – are brightly illuminated near the entrance to the famous park.

On Red Square, a pavilion has been set up for people to donate gifts and humanitarian aid to troops, with upbeat Soviet-era music playing outside.

Some of those interviewed said their seasonal shopping had been made harder by the impact of Western sanctions imposed against Russia over what President Vladimir Putin calls his “special military operation” in Ukraine.

Vladislav Pukharev, owner of a market selling New Year fir trees for people to decorate in their homes, said prices had gone up because the trees were harder to source and more expensive to deliver.

“People started to spend less. They are buying smaller trees than last year. But they do still buy natural trees,” he said.

Jewellery maker Evgeniya, however, said her sales at a seasonal market had sharply increased from last year.

Outside a supermarket, pensioner Natalia said “50% of goods” had disappeared from the shelves. Asked to describe her mood, she said: “Absolutely dreadful. I think everybody shares it.”

Student Matvey said he was missing Western brands and so had spent less on clothes this year. He said one of his friends had been drafted into the military and sent to Crimea, the Ukrainian peninsula that Russia invaded and annexed in 2014.

When the conflict started, he said, “I felt slightly empty. I did not know what to make of it. But then I kind of came to terms with it.”

A young woman, Natalia, said she had noticed far fewer cheeses were available, and she couldn’t buy her favourite Portuguese wine.

Her father Leonid interrupted her: “Oh what a tragedy… There’s lots of Crimean wine. It’s very good. Our wine, Russian.”

Several of those interviewed said they would try to mark the New Year in the usual way, even though that was difficult.

“Even though I’m not ready to celebrate it as usual, it still needs to be celebrated. We need to give gifts etc. I think that we need to fight this feeling of uncertainty,” said Ekaterina, a researcher.

At the tree market, Moscow resident Daniela Khazova said she had “complex feelings” this year.

“The holiday is almost not a holiday any more. But I just want to be with my closest ones now,” she said.