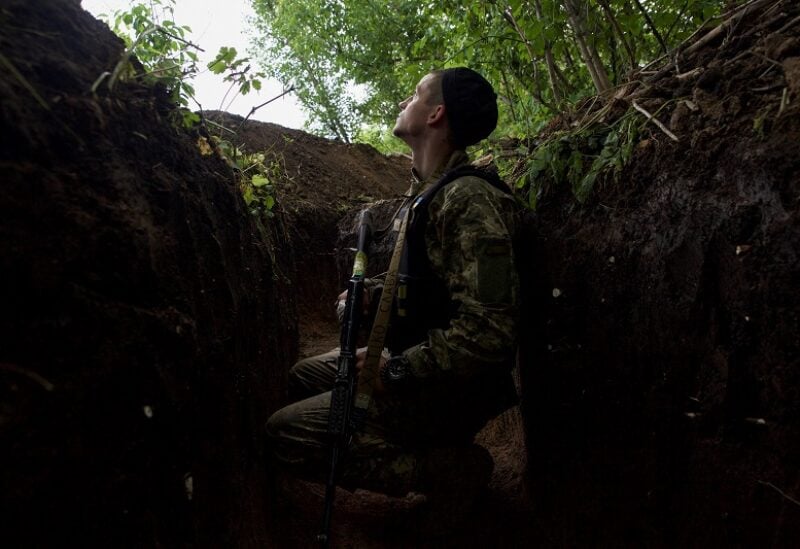 A Ukrainian serviceman sits in a trench at a position, as Russia's attack on Ukraine continues, in Luhansk region, Ukraine June 18, 2022. REUTERS/Anna Kudriavtseva

In an editorial for The Sunday Times, Johnson called on Ukraine’s allies to have “the strategic endurance to survive and eventually prevail.”

He urged sustained support or else the European continent risked “the greatest victory for aggression” since World War II. In his 1,000-word missive, Johnson wrote, “Time is now the vital factor.”

NATO Secretary-General Jens Stoltenberg also told Bild am Sonntag that the war “could take years.”
German Chancellor Olaf Scholz said the Group of Seven nations will underline their commitment to support Ukraine “for as long as necessary” at their upcoming summit in the Bavarian village of Elmau.

In an interview with Germany’s dpa news agency published Saturday, Scholz said he wants to use next week’s meeting with fellow G-7 leaders to discuss Ukraine’s long-term prospects.

“We will continue to support Ukraine for as long as necessary,” Scholz was quoted as saying. “We want to make sure that Russian President (Vladimir Putin’s) calculations do not work out.”

“Putin obviously hopes that everything will fall into place once he has conquered enough land and the international community will return to business as usual,” he added. “That is an illusion.”

He also praised his predecessor Angela Merkel’s diplomatic overtures towards Russia while remaining critical of her energy policy for emphasizing Russian suppliers rather than diversity of supply.
Civilians sheltering at the Azot chemical plant in Sievierodonetsk refused to evacuate, the governor of Ukraine’s Luhansk region, Serhiy Haidai, said on Sunday. He also said that despite the destruction of all bridges leading to Sievierodonetsk, there are ways to evacuate people from the city and bring needed goods.

Ukrainian President Volodymyr Zelenskyy visited soldiers on the southern front line during a working trip to the Mykolaiv region. Ukraine’s defense intelligence directorate said that five Ukrainian civilians have been returned in a prisoner swap with Russia.

Ukraine’s prime minister estimates the total cost of damage to infrastructure since the start of the war at $104 billion (roughly €99 billion). Speaking on Saturday at the British-Ukrainian Infrastructure Summit, Denys Shmyhal outlined some of Ukraine’s and the EU’s financial estimates for the costs incurred since Russia began its invasion on February 24.

German Chancellor Olaf Scholz said an EU candidate status for Ukraine is “necessary.” Ukrainian President Volodymyr Zelenskyy said his country joining the European Union would be a gain for the bloc.

German police said they were investigating several hundred potential Russian war crimes in Ukraine, including political and military officials suspected of being linked to the alleged offences. Germany applies universal jurisdiction which allows a foreign country to prosecute crimes against humanity, war crimes and genocide, regardless of where they were committed or by whom.

British Prime Minister Boris Johnson said he would “love it” if Ukraine could organize the next Eurovision song contest after its Kalush Orchestra won the competition last month. It is customary for the winner of the annual pan-European contest to host the event next year.

Due to the ongoing war on Ukrainian territory, however, Eurovision officials said the tradition would not be followed this time, and that the UK might be asked step in instead. Ukraine protested the decision.