Ukraine will create its own Christmas miracle, Zelenskiy says in defiant message 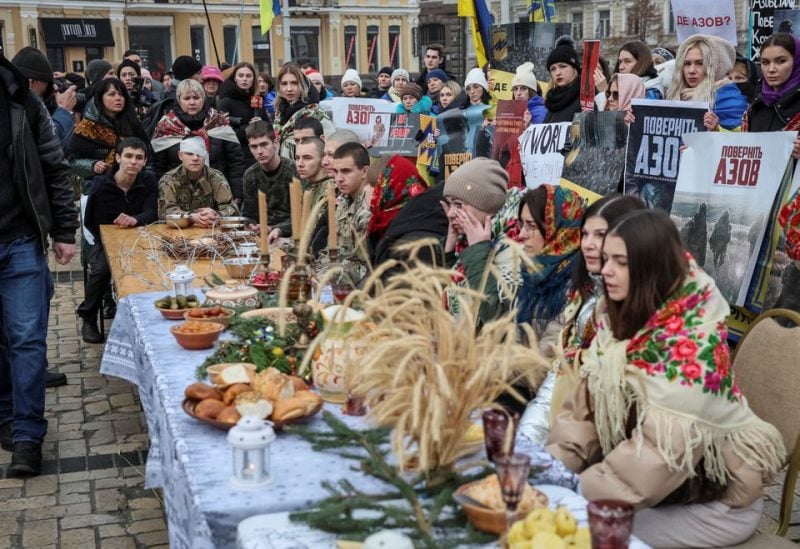 Relatives and supporters of Ukrainian prisoners of war (POWs) from of the Azov regiment attend a performance named "Azov regiment Christmas in captivity" demanding to speed up their release from a Russian captivity, amid Russia's attack on Ukraine, at the Independence Square in Kyiv, Ukraine December 24, 2022 - REUTERS

President Volodymyr Zelenskiy declared in a strong statement on Saturday that Ukrainians will perform their own miracle this Christmas by demonstrating their steadfastness in the face of Russian strikes that have cast millions of people in darkness.

Zelenskiy claimed that while freedom came at a steep price, servitude would be much more costly in his speech made exactly ten months to the day after Russia started a conflict that has resulted in tens of thousands of deaths and millions of people being displaced.

“We endured at the beginning of the war – we withstood attacks, threats, nuclear blackmail, terror, missile strikes. We will endure this winter because we know what we are fighting for,” he said.

Zelenskiy made his remarks in a video address to Ukrainians who celebrate Christmas in December. Most Ukrainians are Orthodox Christians and mark the occasion in early January.

“Even in complete darkness, we will find each other to hug each other tightly. And if there is no heat, we will embrace each other for a long time to warm one another,” he said.

“We will smile and be happy, as always. There is one difference – we will not wait for a miracle, since we are creating it ourselves.”

The clip, which lasted just under nine minutes, was filmed outside at night with just a few white lights and a Christmas tree in the background.

Zelenskiy noted Ukrainian troops were fighting battles in the eastern Donbas region while others were in exile both home and abroad, having fled the Russians.

“We have been fighting them for more than 300 days and eight years. Will we allow them to achieve what they want?” he said, referring to Russia’s 2014 occupation of Crimea.