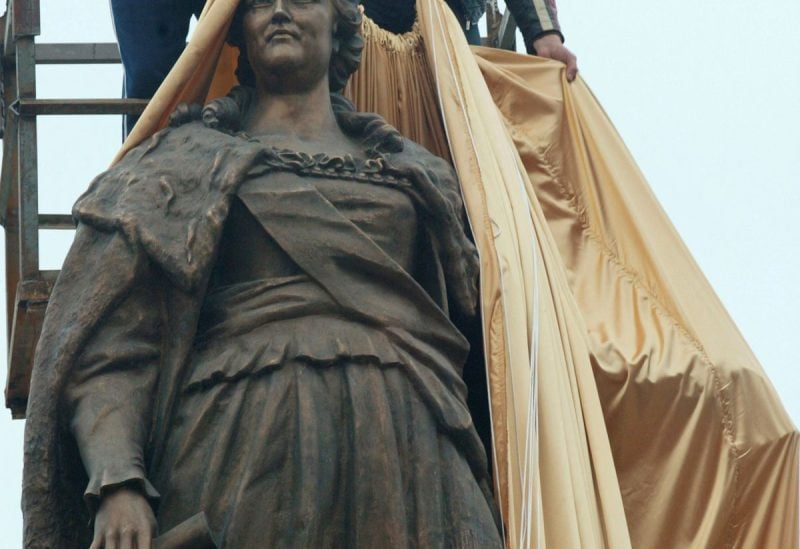 Workers cover a statute of Catherine the Great, the 18th-century empress of Russia, in preparation for an official opening ceremony in the Ukrainian port city of Odesa October 27, 2007. REUTERS/ Konstantin Chernichkin/File Photo

The Odesa city council in Ukraine approved the removal and relocation of a monument honoring Russian Empress Catherine the Great that had lately been at least twice painted red. Odesa is a port city on the Black Sea.

Since the invasion of Ukraine on February 24, which led many Ukrainians to reject their nation’s historical links to Moscow, the statue honoring the city’s founder, which towers above a central square, has been vandalized numerous times.

The city council announced the decision to remove the statue on its website on Wednesday. Local lawmakers had also voted to remove and relocate a monument to an 18th century Russian general, Alexander Suvorov.

A slim majority of Odesa residents had already voted – in an online poll organised by city authorities – to remove the statue to Catherine the Great, who was empress of Russia from 1762 to 1796.

Several petitions had also been submitted to President Volodymyr Zelenskiy calling for the statue to be removed, but only local authorities were legally empowered to make the decision.

The statue, which is formally known as the Monument to the Founders of Odesa and features likenesses of several other tsarist-era figures, will be relocated to a temporary storage space and then to a museum, media outlet Suspilne reported.

Founded by Catherine the Great in the late 18th century, Odesa was a strategic city for Imperial Russia and the Soviet Union but had long been known as a cultural melting pot.

Since Ukraine gained independence in 1991, its port has served as an important part of the Ukrainian economy and has been hit repeatedly during Russia’s war on Ukraine.

First erected in 1900, the statue to Cetherine the Great was dismantled in 1920 under Soviet rule but restored by Ukrainian authorities in 2007.

Since Moscow’s invasion, Ukrainian authorities have been removing monuments associated with Russia and renamed some streets linked with Russia under a process of “derussification”.