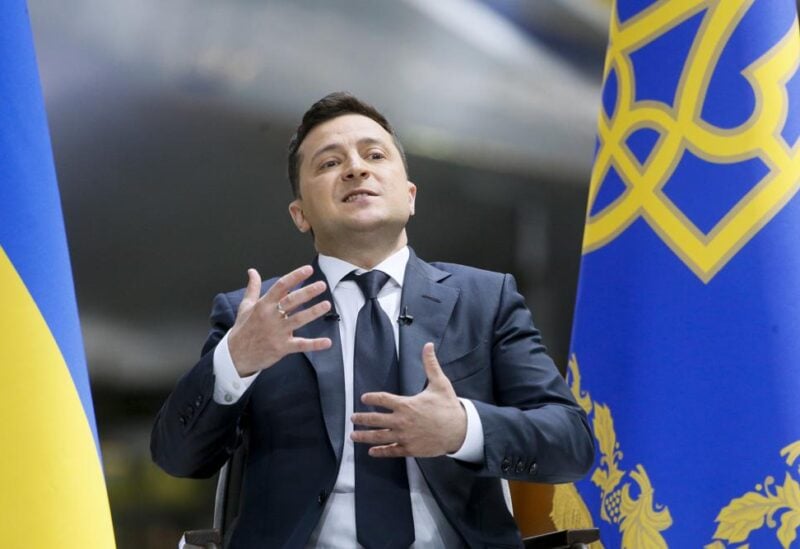 Ukrainian President Volodymyr Zelenskyy gestures while speaking to the media during a news conference with the world's largest airplane, Ukrainian Antonov An-225 Mriya in the background at the Antonov aircraft factory in Kyiv, Ukraine, Thursday, May 20, 2021. (AP Photo/Efrem Lukatsky)

In an interview with the Italian newspaper La Repubblica published by his office on Tuesday, Ukrainian President Volodymyr Zelensky accused Germany of obstructing the transfer of NATO weaponry to Kiev.

Zelensky’s remarks come as the West has claimed Russia may be contemplating an invasion of Ukraine, with the US threatening Moscow with severe economic repercussions if it goes forward with an attack.

“Germany just prohibited us from receiving anti-drone guns and anti-sniper equipment from NATO, which are only defensive tools,” Zelensky explained in the interview.

“Aren’t we entitled to them in the eighth year of the war?” “Of course, we do,” he added.

According to a representative for the German Foreign Ministry, the country cannot comment “on the private decisions at the core of the (NATO) alliance at this moment.”

Ukraine said last month that it was seeking further military assistance from its Western partners in order to discourage Russia from launching an invasion.

Since 2014, Kiev has been fighting pro-Russian rebels in its eastern areas. The violence started soon after Moscow took control of Ukraine’s Crimean peninsula.

Fears have intensified in recent weeks that Moscow, which has gathered some 100,000 troops along Ukraine’s border, could launch a large-scale offensive.

In a video chat last week, US President Joe Biden told Russian President Vladimir Putin that if Moscow launches an assault, he will face “sanctions like he’s never seen.”

According to Zelensky, the appeal did not result in a reduction in soldiers on the Russian side of the border.

“There is no reduction in the military group on our borders as a result of the talks between the presidents of the United States and Russia,” Zelensky stated.

In the case of an invasion, he warned of “much heavier losses.”

“Is Russian society willing to pay with its boys’ lives for an effort to capture another area of Ukraine?” he said.

The deployment of drones by Kiev drew condemnation from Russia and several of its Western allies, notably France and Germany.

Putin denies plotting an invasion of Ukraine and blames NATO for the region’s heightened tensions.

The Russian president has requested “formal guarantees” from Western countries that Ukraine would not join NATO.

Kiev and its Western allies accuse the Kremlin of militarily aiding Ukrainian insurgents.

More than 13,000 people have died as a result of the violence in eastern Ukraine.