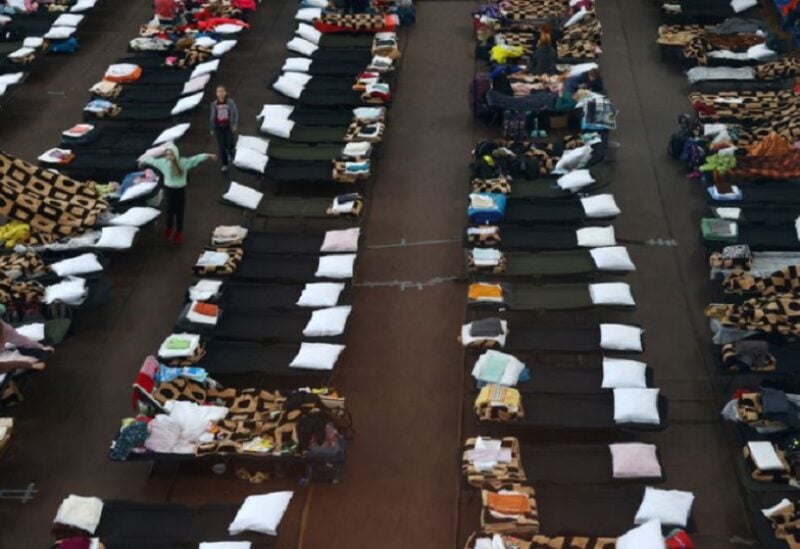 A general view shows a sports hall of a primary school, transformed into temporary accommodation for people fleeing the Russian invasion of Ukraine, in Przemysl, Poland, March 19, 2022. REUTERS/Fabrizio Bensch

As people flee war in Ukraine, the Israeli government is preparing for a wave of refugees from Jewish communities, with 200,000 Ukrainian Jews eligible for immigration to Israel, it seems to have already begun.

A small four-star hotel near the central bus station in west Jerusalem has become a temporary home to Ukrainians fleeing the war back home. For some, it is their first time in Israel. For others, such as Julia Rabenko and her teenage son Kyrill, they’re returning after past visits. Regardless, none imagined they would come to Israel under these circumstances — with barely anything prepared for a longer stay.

“Israel is a good country, it’s a country of our dreams perhaps. But … I want to come here in a normal way — not like this, but with the whole family,” says Rabenko to DW in the lobby of the hotel.

Her husband had to stay behind in Ukraine due to the military draft. While the family had previously contemplated immigrating to Israel, and had already sent their eldest son here, it was not something they planned to undertake so soon.

“For me, it was a very difficult decision to go,” Rabenko says. “I thought I could stay. But all these air raid sirens came more often, and my son didn’t always want to go to the shelter,” she says. The English teacher still grapples with making sense of what upended her life, and that of her family and friends, who are now scattered across Ukraine, Poland, Germany and Israel.

Like others, Rabenko, her younger son and their orange tabby cat made the dangerous journey by bus from their hometown city of Cherkasy, about 200 kilometers (124 miles) south of Kyiv, to the Romanian border. “It was one bag for me, one bag for my son. And our cat — he is part of the family,” she says.

“It’s very difficult when you lose everything in one day.”

Volunteers helped them in Romania, and members of the Jewish community set them up in a hotel for five days.

The plan was to stay in Romania, close to home, but the journey continued to Israel. For now, they appreciate the safety and support here. “With no documents, neither for my cat, nor for my son — but we are in Israel,” she says.

Rabenko continues to teach English classes online — with her pupils now scattered in various locations, including some still in Ukraine. Eventually, she and her family want to go back to Cherkasy when the war comes to an end.

All here at the hotel have had their lives suddenly uprooted. Many of those who sought refuge in Israel came under Israel’s law of return, which grants entry on grounds of Jewish ancestry.

The law allows people who are born Jewish, along with their spouses, or someone with at least one Jewish grandparent, the right to “make aliyah” — immigrate to Israel.

This Monday, the Jewish Agency, which assists with aliyah, announced that it intends to ease bureaucracy in this typically lengthy process. The “Aliyah Express” program will allow refugees to board flights before they have definitive certification that they are eligible. Agency staff and other organizations are already on the ground in Poland, Romania, Moldova and Hungary to help refugees.

According to the agency, currently 4,500 refugees have been set up in hotels in countries neighboring Ukraine and are awaiting flights to Israel, an official said.

In light of the conflict in Ukraine, the Israeli government is preparing for a fresh wave of immigrants in what it calls “Operation Israel Guarantees.”

Ukraine and Russia are still home to large Jewish communities. An estimated 200,000 Ukrainians are considered eligible for immigration to Israel.

In the 1990s, more than a million people made aliyah after the fall of the Soviet Union in 1989. Israeli officials have suggested that they now expect more immigrants from Russia, as living conditions could deteriorate.

Israel’s government has come under fire for its initial policies regarding non-Jewish arrivals from Ukraine, which involved frequent backtracking and strict rules. Interior Minister Ayelet Shaked had set a controversial quota restricting such entries to 5,000. After public outcry, the government announced that any relatives of Israelis could enter, with no numerical cap.

Under current plans, another 20,000 Ukrainians who lived in Israel before the war — some of them illegally — will be granted temporary stays.

The Ukrainian embassy in Israel called upon Israeli policymakers to show more compassion by relaxing entry requirements for those who have relatives or friends willing to host them. “We ask for your help,” Ukrainian president Volodymyr Zelenskyy, who is Jewish, said in his virtual address to Israeli lawmakers on Sunday. “Even for basic visas.”

As of this week, more than 15,000 Ukrainians have entered the country since the beginning of the war, including 4,400 who are eligible under the Israeli law of return, according to the immigration authority.

Also among the arrivals are Alexandra Rottenberg (she also goes by Sasha), who is Jewish on her mother’s side, along with her partner, Vladimir Rottenberg, and their cat, Bowie (who was too skittish to come downstairs and be photographed). They arrived in Israel on a special evacuation flight from Warsaw at the beginning of March after a long and dangerous journey by train.

Back home in Kyiv, the pair worked in social research and co-founded a nongovernmental research center. For the time being, both seek academic opportunities in Israel.

“We don’t think too much about our losses — not enough time has passed yet,” Vladimir Rottenberg says. “We have only two bags and the bag for the cat, and live in hotels,” he says.

Alexandra and Vladimir Rottenberg will seek academic opportunities in Israel

“Now we try to make something normal, it’s like we put up a psychological defense,” he adds. “We might understand it in one or two months.”

A few universities and colleges have said they will set up special fellowships for Ukrainian researchers like Sasha and Vladimir Rottenberg. But the couple’s thoughts continue to return to those who stayed behind, including one of their close friends.

“We try to support them, but over the long distance it is very difficult. We can just call or send messages,” says Sasha Rottenberg.

“In such extreme moments, one would just like to be able to say: It is going to be okay. But of course, it is not.”