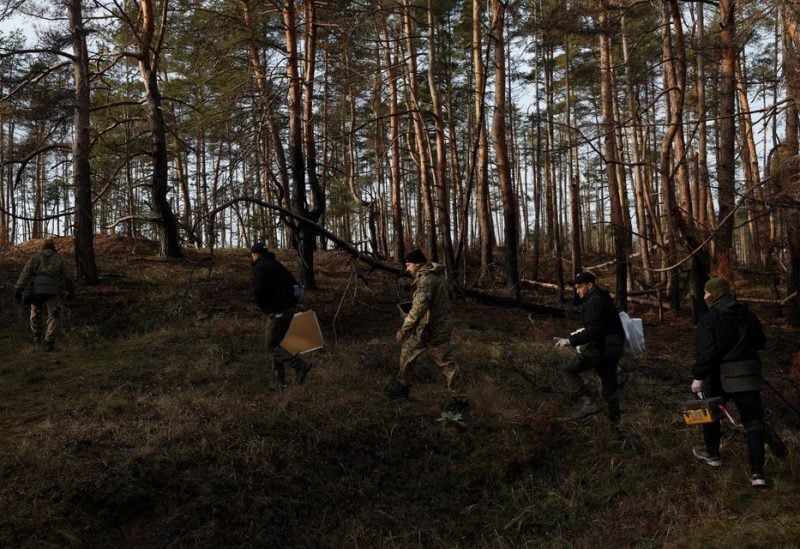 The team from the humanitarian mission "Black Tulip" which searches, exhumes, and retrieves bodies of soldiers, as Russia's attack on Ukraine continues, in Yampil, Ukraine, January 2, 2023 - REUTERS

A team of volunteers is scouring the eastern Ukraine battlefields in an effort to locate the bodies of fallen troops and deliver them to their families.

Members of the “Black Tulip” organization claim that despite the everyday horrors of their work, they believe they are doing good by providing closure to the families of lost soldiers.

“Their parents are waiting for them at home,” said volunteer Artur Simeiko. “Then, they can be buried properly.”

“They shouldn’t lie in some forest, field, or on the street,” he said.

Made up of around 100 volunteers, the group undertakes the at times dangerous task of locating and exhuming bodies of Russian and Ukrainian soldiers close to the front line.

Bodies are often found with the remains of explosive weapons, and some are booby-trapped, the group said. It declined to say how many bodies it had found.

Black Tulip member Oleksii Iukov, who lost an eye exhuming the remains of a World War Two-era soldier during a previous mission, said his group was determined to return each fallen Ukrainian.

Artillery boomed in the distance as he described digging up bodies, a feeling to which he said he had not become accustomed.

“Whenever you dig up a guy, you live through his nightmare and the horror he went through in his last moment, when he understood that this is the end, there’s no way back,” Iukov said.

“Together with him, you go through all of this again. This is very, very difficult.”