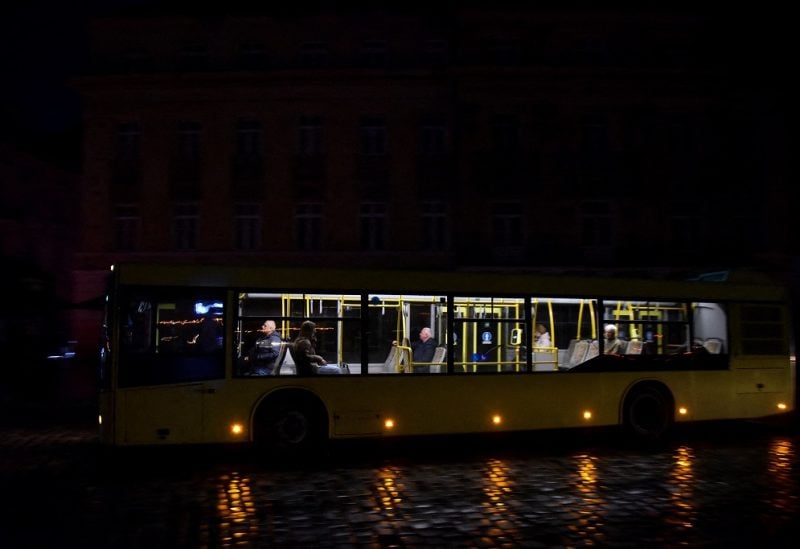 Passengers are seen inside a public bus in the city centre without electricity after critical civil infrastructure was hit by a Russian missile attacks in Lviv, Ukraine October 11, 2022. REUTERS/Pavlo Palamarchuk/File Photo

Liubov Palii was sitting at her computer when the lights in her one-bedroom apartment went out due to Russian strikes on Ukraine’s energy network.

By the light of her phone, she began to play with her four-month-old baby boy, Vova.

“When this happens, we just play together in the bed, lay together, I light the candles and the flashlight in my phone,” she said.

“I couldn’t take a shower or bathe my baby, because it’s hard to do this in the dark. It hasn’t influenced his feeding, because one light is enough. At least we still have water when the lights go off.”

Families like Palii are bracing for a harsh winter after Russian missiles and drones rained on cities across Ukraine this week, hitting power plants and electricity stations and damaging around 30% of the country’s energy infrastructure.

While she was pregnant, Palii’s family had already fled the advancing Russian occupation in the southern Kherson region and moved to Kyiv in April. Through tears, she explained that while no part of the country was safe, it had been less scary in the capital than in Moscow-controlled territory.

“Before Monday I knew that shelling could happen. I tried to stay calm, even though we were scared and cried a little. My husband didn’t let me panic. If I panic, it will rub off on my child. He needs calm parents,” she said.

President Volodymyr Zelenskiy’s government said power had been restored to millions of people, but warned Ukrainians to prepare for more blackouts and asked people to cut down on their electricity use wherever possible.

“It is important to understand that Russian terrorists will try to use the cold as their weapon,” Prime Minister Denys Shmyhal said on Wednesday.

“In their sick imagination, Ukrainians sitting for several hours without electricity is a victory. They think that this way they will force us to surrender. This will not happen.”

Zelenskiy adviser Mykhailo Podolyak told Reuters that the government had prepared for strikes on critical infrastructure and managed to prevent the power grid from overloading, thanks also to an appeal to people to cut back on electricity use.

“Thanks to the responsible approach of Ukrainians, who limited their consumption in the evening hours, the system managed,” he said in written comments.

He also ruled out retaliatory strikes on Russian energy infrastructure. “Ukraine is waging a defensive war.”

Power has been restored to more than 4,000 towns and villages since the strikes, Shmyhal said, but warned of difficult times ahead.

The government is urging citizens to stock up on warm clothes, candles, flashlights and batteries while asking people to limit their use of energy-guzzling appliances like ovens, washing machines or kettles during peak consumption times.

“It’s not about sitting in the dark. It is only necessary to reduce the use of the most energy-intensive devices,” Shmyhal said.

It has also asked businesses to switch off outdoor advertising and said homes should be heated only up to a maximum of 18 degrees Celsius (64.4°F) in the coming months.

So far that plea has had some impact – Shmyhal said consumption reduced by 10% between Tuesday and Wednesday, without giving specific figures.

“(In the winter) we could turn on the stove to keep warm, otherwise I don’t know how we will heat the apartment up. We will dress up warmly and hide under many covers,” said Palii, a 23-year-old manicurist.

The authorities also plan to set up mobile heating stations in the streets in case people experience heating outages at home, and have developed evacuation plans in case critical energy facilities are hit.

In the Kharkiv region near the eastern frontline, the authorities are handing out free firewood.

Some Kyiv residents like Sonik Markosian were already prepared when the lights went out.

The 27-year-old, who lives in Kyiv’s Solomianskyi district, recently started a business making candles in the small kitchen of the flat she shares with her boyfriend, had some of her wares on hand.

“We had a few candles all over our house. So we were lucky enough to be prepared for the blackout,” she said referring to the power outages that hit her area in the previous two days.

“We are planning to make more candles and order more materials because of these blackouts,” she said.