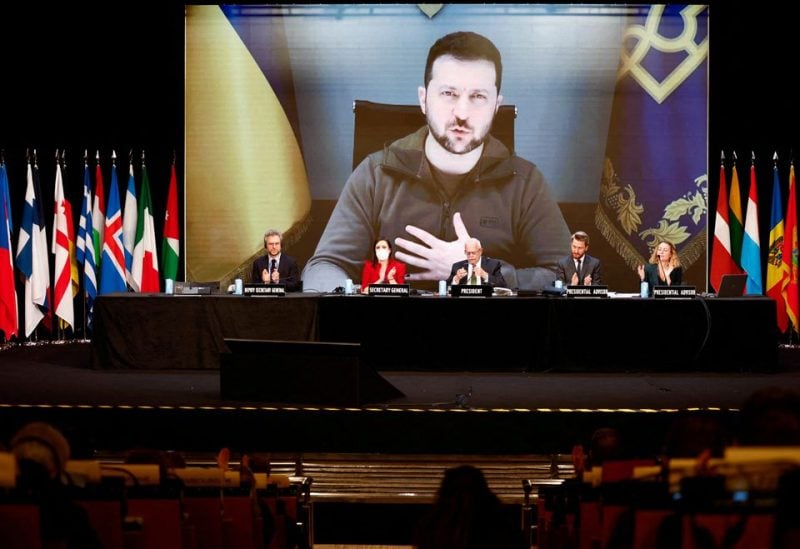 Ukraine's President Volodymyr Zelenskiy is seen on the screen as he speaks during the 68th Annual Session of the NATO Parliamentary Assembly in Madrid, Spain, November 21, 2022. REUTERS/Juan Medina/File Photo

Ukrainian President Volodymyr Zelenskiy urged the United Nations Security Council to act against Russia over air strikes on civilian infrastructure that again plunged Ukrainian cities into darkness and cold as winter sets in.

Russia unleashed a missile barrage across Ukraine on Wednesday, killing 10 people, forcing shutdowns of nuclear power plants and cutting water and electricity supply in many places.

“Today is just one day, but we have received 70 missiles. That’s the Russian formula of terror. This is all against our energy infrastructure… Hospitals, schools, transport, residential districts all suffered,” Zelenskiy said via video link to the council chamber.

Ukraine was waiting to see “a very firm reaction” to Wednesday’s air strikes from the world, he added.

The council is unlikely to take any action in response to the appeal since Russia is a member with veto power.

The Russian president “will try to freeze the country into submission,” she added.

Russia’s U.N. ambassador Vasily Nebenzya responded by complaining that it was against council rules for Zelenskiy to appear via video, and rejected what he called “reckless threats and ultimatums” by Ukraine and its supporters in the West.

Nebenzya said damage to Ukraine’s infrastructure was caused by missiles fired by Ukrainian air defence systems that crashed into civilian areas after being fired at Russia’s missiles, and called on the West to stop providing Kyiv with air defence missiles.

The capital city of Kyiv was one of the main targets on Wednesday of the missile strikes. “Today we had three hits on high-rise apartment buildings. Unfortunately 10 people died,” said Interior Minister Denys Monastyrsky. Reuters was unable to independently verify the report.

Explosions reverberated throughout Kyiv as Russian missiles bore down and Ukrainian air defence rockets were fired in efforts to intercept them.

“Our little one was sleeping. Two years old. She was sleeping, she got covered. She is alive, thanks be to God,” said a man who gave his name as Fyodr, walking away from a smouldering apartment building that was hit in Kyiv, dragging a suitcase.

All of the Kyiv region, where over 3 million people live, lost electricity and running water, Kyiv’s governor said. Much of Ukraine suffered similar problems and some regions implemented emergency blackouts to help conserve energy and carry out repairs.

Early on Thursday, Zelenskiy said power and other services were being reconnected in more areas. “Energy specialists, municipal workers, emergency crews are working around the clock,” he said in a video address.

Since October, Russia has acknowledged targeting Ukraine’s civilian energy grid far from front lines as a Ukrainian counter-offensive has recaptured territory from Russian occupiers in the east and south.

Moscow says the aim of its missile strikes is to weaken Ukraine’s ability to fight and push it to negotiate. Kyiv says the attacks on infrastructure amount to war crimes, deliberately intended to harm civilians and to break the national will.

That will not happen, Zelenskiy vowed in an earlier video address posted on the Telegram messaging app.

“We’ll renew everything and get through all of this because we are an unbreakable people,” he said.

Ground battles continue to rage in the east, where Russia is pressing an offensive along a stretch of front line west of the city of Donetsk, which has been held by its proxies since 2014.

Among those fighting the Russians in Bakhmut are a unit of Chechen fighters, who hope a Ukrainian victory could spark political crisis in Russia and bring down the powerful pro-Moscow leader of Chechnya.

“We’re not fighting just for the sake of fighting. We want to achieve freedom and independence for our nations,” said a fighter using the nom-de-guerre Maga.

Further south, Russian forces were digging in on the eastern bank of the Dnipro River, the general staff said, shelling areas on the west bank including the town of Kherson, which was recently reclaimed by Ukrainian forces.

Reuters was not able to immediately verify the battlefield accounts.

Moscow says it is carrying out a “special military operation” to protect Russian speakers in what Putin calls an artificial state carved from Russia. Ukraine and the West call the invasion an unprovoked land grab.

Western responses have included billions of dollars worth of financial aid and state-of-the-art military hardware for Kyiv and waves of punitive sanctions on Russia.