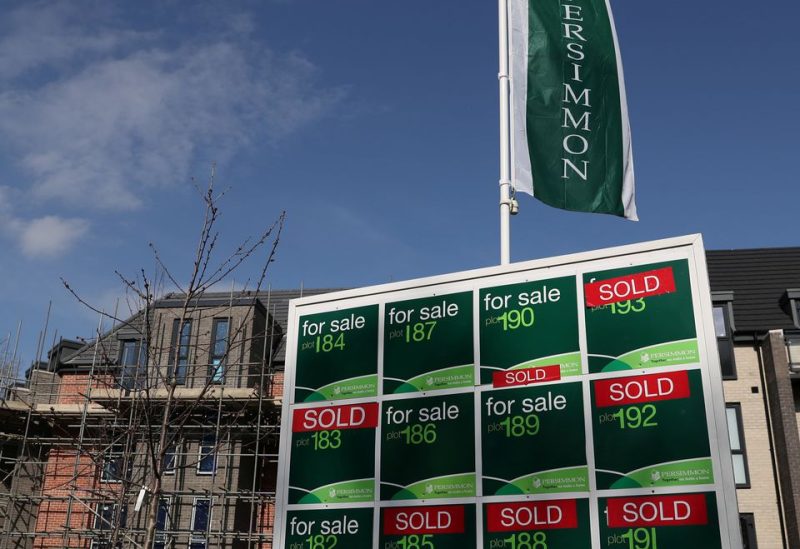 Persimmon signage is seen at a building site in Durham, as the spread of coronavirus disease (COVID-19) continues. Durham, Britain, March 25, 2020. REUTERS/Lee Smith

The second-largest homebuilder in the UK, Persimmon Plc, issued a similar warning to its larger competitor Barratt on Thursday, predicting a decline in house demand as a result of increasing mortgage rates and broader economic uncertainties.

A rise in mortgage rates and a decrease in loan availability have both hampered the UK property market recently. More pressure has been put on the economy due to worries about rate hikes in the near future and the effects of soaring inflation on households.

Last month, housing prices slid the most since the 2008 global financial crisis, while the number of mortgages approved by UK lenders in November fell to its lowest since mid-2020.

The FTSE 100 firm said market conditions worsened in the fourth quarter with weekly private net sales more than halving year on year to 0.30 units per outlet, and dropping to 0.19 in the last seven weeks.

“Higher mortgage rates, inflation, heightened market uncertainty and the end of reservations under (the) Help to Buy (scheme) in England had a sharp impact on the group’s private sales rates in the fourth quarter and will have an adverse impact on the outlook for 2023,” the company said in a full-year trading statement.

The government-backed incentive for first-time buyers was closed to new applications in England on Oct. 31.

The homebuilder provided limited detail on its 2023 outlook, adding that it was too early to predict a recovery in demand.

JP Morgan analysts in a note called the full-year trading update “mixed” and said booking levels were below their expectations.

Persimmon said current forward sales – deals signed between buyers and builders with a future date – stood at 1 billion pounds ($1.21 billion), down from 1.6 billion a year earlier.

Britain’s largest housebuilder Barratt on Wednesday said it would build fewer homes this year than last, while its order book in the nearly four months to end-December slid about a third.