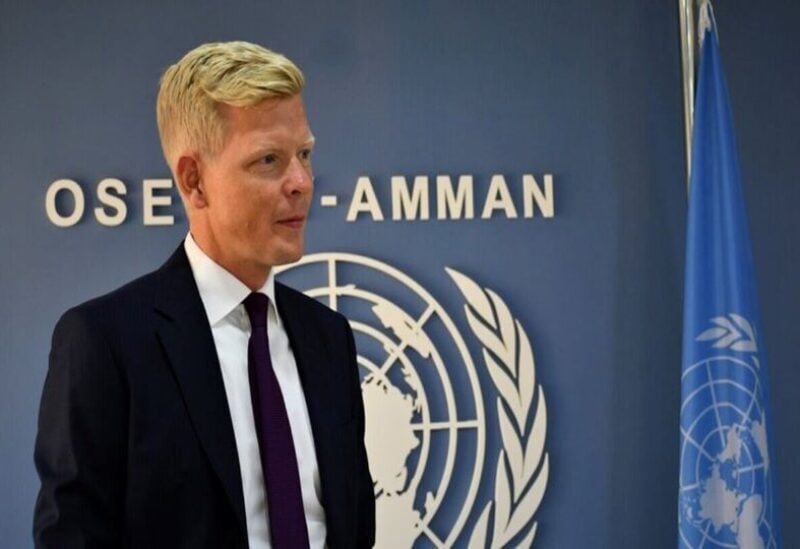 The United Nations envoy’s to Yemen Hans Grundberg’ media office released a statement saying that he arrived in Sanaa yesterday where he will meet with the Houthis and discuss the reopening of roads in the Taiz governorate and extending the truce.

“Grundberg will discuss with the Houthis the United Nations’ proposal to reopen roads in Taiz and other governorates, in addition to efforts to strengthen the truce, economic and humanitarian measures, and ways to move forward towards resolving the crisis in the country,” the statement said.

Earlier on Tuesday, the Yemeni government announced its approval of the UN “amended” proposal to reopen roads in Taiz in the southwest of the country, calling for international pressure to implement it.

On Monday, Grundberg announced that he had submitted a modified proposal to the Houthi delegations and the Yemeni government to gradually reopen roads, including an implementation mechanism, and guarantees for the safety of civilian travellers.

The updated proposal calls for the reopening of roads, including a main route leading into and out of Taiz city, as well as roads in other governorates that aim to alleviate the suffering of citizens and enhance the delivery of goods. The proposal takes into consideration suggestions from both parties, as well as feedback from Yemeni civil society. It also takes into account the parties’ concerns.

Last Thursday, the two sides agreed to extend a humanitarian truce in Yemen for another two months.

The truce’s main conditions include resuming commercial flights through Sanaa airport, and the opening of roads in the city of Taiz, which has been besieged by the Houthis for seven years.

Impoverished Yemen has been beset by violence and chaos since 2014, when the Houthis overran much of the country, including the capital, Sanaa. The crisis escalated in 2015 when a Saudi-led military coalition launched a devastating air campaign aimed at rolling back Houthi territorial gains.

On 1 April, the UN envoy to Yemen, Hans Grundberg, announced that the parties to the conflict had agreed to a two-month “extendable” truce, which began the following day. The Saudi-led Arab coalition, pro-government forces and the Houthis welcomed the truce.