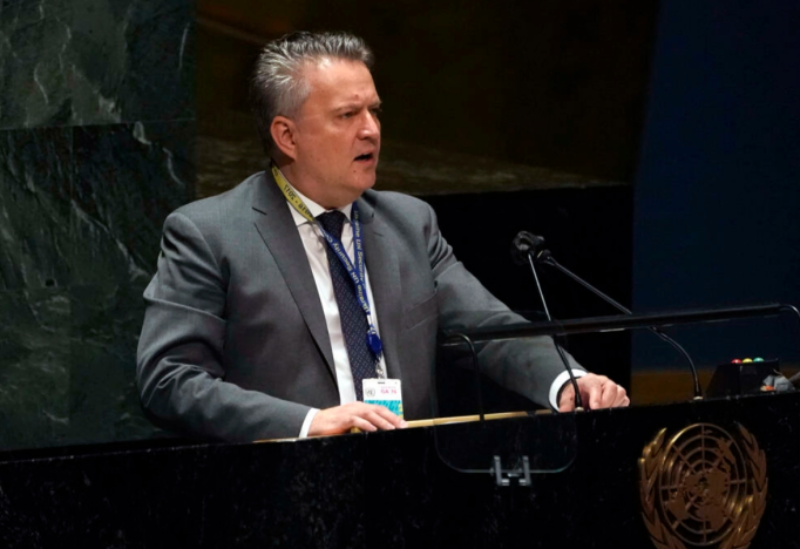 A new non-binding resolution was being debated by the UN General Assembly on Wednesday, which, if adopted by a majority of member states, will “demand” that Russia stop the war in Ukraine “immediately”.

On March 2, 141 countries approved an earlier resolution that demands that Russia immediately cease the use of force against Ukraine.

Five states, including Russia, voted against and 35 abstained. The resolution was non-binding and, other than demonstrating Russia’s isolation on the world stage, did not appear to impact the fighting.

On Wednesday Ukraine put the new resolution forward at another emergency session of the General Assembly in New York, AFP reported.

The text, which is also non-binding, “demands an immediate cessation of the hostilities by the Russian Federation against Ukraine, in particular of any attacks against civilians and civilian objects.”

It also reiterates UN Secretary-General Antonio Guterres’ call for Moscow to “stop its military offensive, as well as his call to establish a ceasefire and to return to the path of dialogue and negotiations.”

The draft resolution, seen by AFP, is supported by 88 countries and had been initially prepared by France and Mexico.

The United States ambassador to the UN, Linda Thomas-Greenfield, described it as “building” on the March 2 vote.

She said it “makes that appeal to the one person with the ability to stop the violence. And that’s Vladimir Putin.”

Her French counterpart Nicolas de Riviere said France was calling on Moscow to “stop the aggression of Ukraine, which has been killing civilians, including children, medical staff and journalists for a month.”

“It is a massacre and the worst is still ahead of us,” he continued, recalling that the “absolute priority is an immediate cessation of hostilities and full compliance with international humanitarian law.”

Also on Wednesday, Russia will try again to submit a resolution to the UN Security Council on the “humanitarian situation” in Ukraine.

If the resolution is not vetoed, it will need at least nine votes from the 15-member body to be adopted — which diplomats say is unlikely.

Last week Russia — which invaded Ukraine on February 24, and has been accused of committing war crimes against civilians — cancelled an earlier attempt at the vote due to a lack of support from its closest allies.

That resolution never had a chance of adoption because it would have been vetoed by Western powers.

Russia, however, had hoped that some votes in favor would have shown it still has some support on the world stage following its all-out assault on Ukraine.