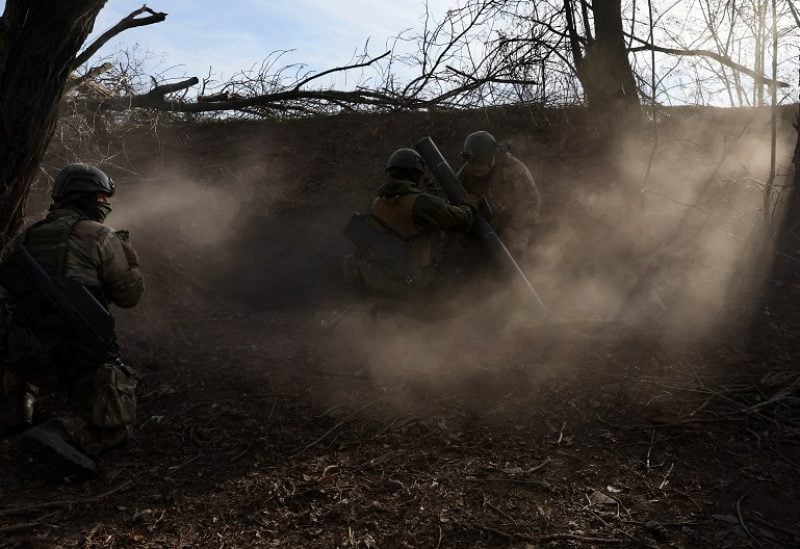 Service members with the Freedom of Russia Legion under the Ukrainian Army prepare to fire a mortar at a Russian military position, as Russia's invasion of Ukraine continues, near Bakhmut, Ukraine, December 2, 2022. REUTERS/Leah Millis

As winter freeze sets in, and attacks on Ukraine’s infrastructure leave people without heat or electricity, Ukrainian civilians face increased risk of injury or getting killed by landmines and unexploded munitions, the International Red Cross warned Friday.
Snow and ice make these bombs and weapons harder to detect, while the lack of heating is forcing more people to venture into potentially weapons-laden forests in search of firewood during the Russia-Ukraine war, said the International Committee of the Red Cross (ICRC).
“Mines and unexploded ordnance lurk in farmland and neighborhoods, each holding the potential to destroy lives,” said Ariane Bauer, the ICRC regional director for Eurasia.
“Mines must not be used, and we appeal to the parties to the conflict to mark and clear the contaminated areas as soon as possible and inform civilians of the dangers.”
While mines and unexploded ordnance have been a longstanding danger in this region, their risk has risen exponentially since February, when Russia launched the war.
More land has become littered with landmines, artillery shells, grenades, mortars, rockets, air-dropped bombs, and cluster munitions, many of which fail to detonate but remain a risk to civilians.
Swathes of the eastern Donetsk and Luhansk regions were already heavily contaminated with unexploded ordnance following eight years of conflict with Russian-backed forces starting in 2014.
The winter season now compounds the long-term dangers civilians face, said the Red Cross.
The misery and destruction inflicted by such hidden threats are immense.
“Blasts can be fatal or cause injuries such as blindness, burns, damaged limbs, and deep shrapnel wounds,” said the ICRC.
In addition to the loss of life and injury, unexploded ordnance frequently hinders or prevents access to essential services like hospitals or makes repairs to water and power facilities unsafe or prolonged.
Until February, Ukraine was home to the ICRC’s largest weapons contamination team.
Today the ICRC said 18 of its weapons contamination specialists are helping mark and clear areas with unexploded ordnance and are sharing mine safety information with communities and municipal workers.
The ICRC said it is also helping repair damaged homes and essential infrastructure like water and electricity systems and supporting over one million people with heating.
The Red Cross issued a reminder that the 25th anniversary of the Anti-Personnel Mine Ban Convention is Sunday, Dec. 4.
Since the convention came into force, civilian causalities caused by anti-personnel mines have fallen drastically, 90% globally. A total of 164 states have signed the convention, but China, Russia, and the US have not.
The risks these weapons still pose to civilians underscore there is still a long way to go to reach the convention’s goal of a mine-free world by 2025.​​​​​​​