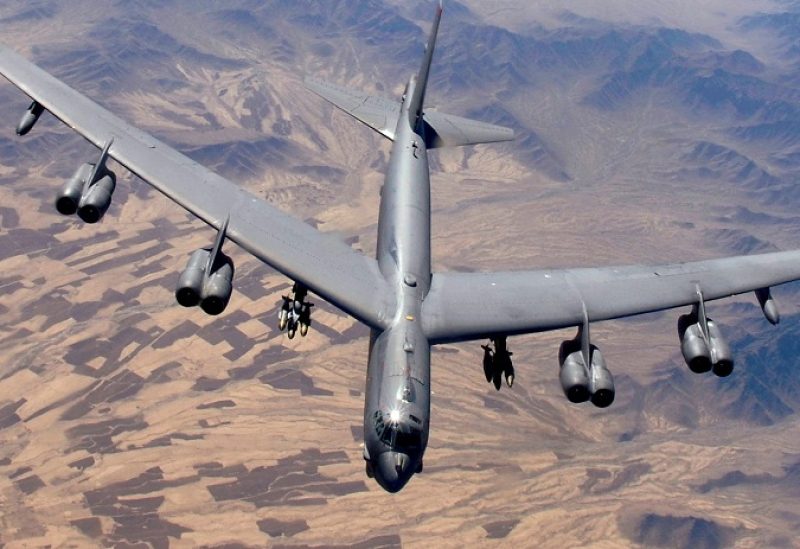 FILE PHOTO: A B-52 Stratofortress, flown by Capt. Will Byers and Maj. Tom Aranda, prepares for refueling over Afghanistan during a close-air-support mission in this undated handout photo. U.S. Air Force/Master Sgt. Lance Cheung/Handout via REUTERS ATTENTION EDITORS - THIS IMAGE HAS BEEN SUPPLIED BY A THIRD PARTY. To match Special Report USA-CHINA/BOMBERS/File Photo

Amid heightened tensions with Beijing, the United States is planning to deploy up to six nuclear-capable B-52 bombers to an air base in northern Australia, a source familiar with the matter said on Monday
Dedicated facilities for the bombers will be set up at the Australian air force’s remote Tindal base, about 300 km (190 miles) south of Darwin, the capital of Australia’s Northern territory, said the source, who declined to be identified because they are not authorised to speak publicly on the issue.
The development was first reported by the Australian Broadcasting Corp (ABC)’s Four Corners programme, citing U.S. documents.
Prime Minister Anthony Albanese said Australia engages with the United States on defence alliances “from time to time.”
“There are visits, of course, to Australia, including in Darwin, that has U.S. Marines, of course, on a rotating basis stationed there,” Albanese said during a media conference.
Australia’s Northern Territory is already host to frequent military collaborations with the United States. Thousands of U.S. Marines rotate through the territory annually for training and joint exercises, started under President Barack Obama.
Australian Defence Minister Richard Marles’ office declined to comment.
The United States has drawn up detailed plans for what it calls a “squadron operations facility” for use during the Northern Territory dry season, an adjoining maintenance centre and a parking area for the B-52s, the ABC report said.
The ability to deploy the long-range bombers to Australia sends a strong message to adversaries about Washington’s ability to project air power, the U.S. Air Force was quoted as saying in the report.
Last year, the United States, Britain and Australia created a security deal that will provide Australia with the technology to deploy nuclear-powered submarines, riling China.
Putting B-52s, which have a combat range of about 14,000 km, in Australia will be a warning to Beijing, as fears grow about an assault on Taiwan, Becca Wasser, senior fellow at the Washington, D.C.-based Centre for a New American Security, told the ABC.
This year, the U.S. deployed four B-52s to its Andersen Air Force base in Guam.