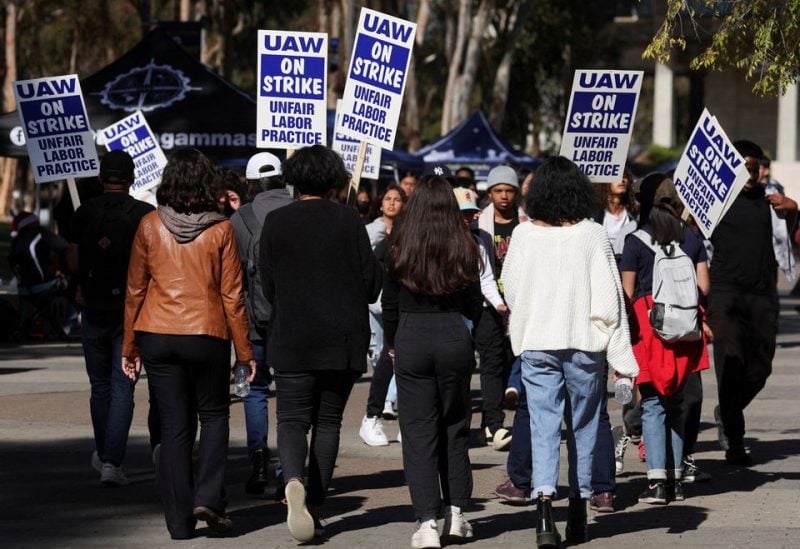 Academic workers at UC San Diego walk out as thousands of employees at the University of California campuses have gone on strike in an effort to secure improved pay and working conditions in San Diego, California, U.S., November 14, 2022. REUTERS/Mike Blake/File Photo

Academic workers at the University of California (UC) ended a nearly six-week strike on Friday, which unions described as the longest work stoppage ever at a U.S. institution of higher learning.

On Nov. 14, thousands of academic workers across the state went on strike, forming picket lines and staging loud protests to demand higher wages for teaching assistants and others.

Some 48,000 academic workers represented by the United Auto Workers will return to work in January after the winter break, union leaders said, after ratification votes by large majorities of two fractious UAW bargaining units.

The striking scholars included teaching assistants, researchers, tutors and other graduate student instructors at all 10 UC campuses and the Lawrence Berkeley National Laboratory.

“The University of California welcomes the ratification of these agreements with our valued graduate student employees,” executive director of systemwide labor relations Letitia Silas said in a statement.

“Today’s ratification demonstrates yet again the University’s strong commitment to providing every one of our hardworking employees with competitive compensation and benefit packages that honor their many contributions to our institution, to our community, and to the state of California,” she added.

When the strike began, the union said its members were working themselves into extreme debt with a base salary for part-time employees starting at $24,000 per year.

University administrators and union leaders reached an agreement last week after a series of negotiations. The thousands of striking academic workers began voting this week on whether to ratify the deal with the University of California.

The agreement was hailed by union and university supporters as a landmark labor deal that would set a new national standard, boosting wages and working conditions for graduate students employed at public universities.

The agreement would provide wage increases of up to 66% over the 2-1/2 year life of the contract, according to leaders of the two UAW union locals representing the 36,000 graduate students covered by the deal.

By the fall term of 2024, the minimum nine-month salary for teaching assistants would rise to $36,500 at UC Berkeley, UC San Francisco and UCLA, and to $34,000 at other campuses, according to the university.

Some detractors said the pact falls short in meeting the living costs grad students face in pricey cities where many UC campuses are located, and critics faulted the deal for giving up on union demands to tie wage gains to housing costs.