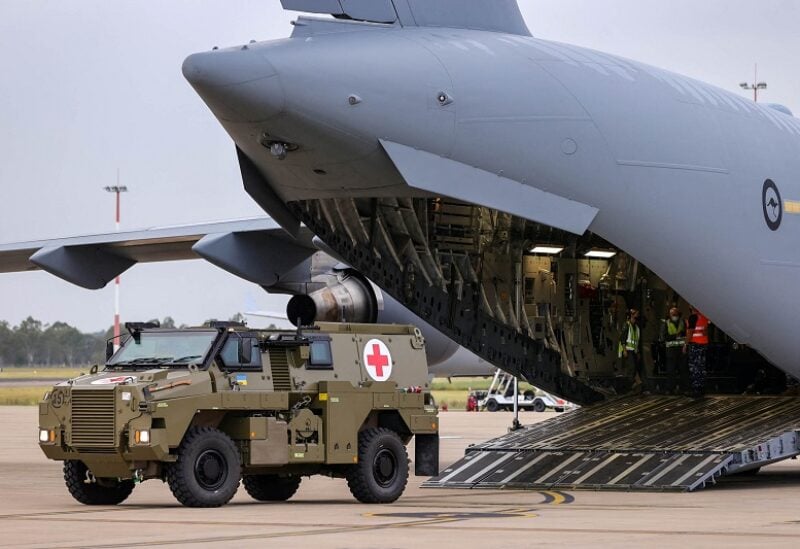 A Bushmaster PMV is loaded into a C-17 Globemaster which is headed for Ukraine ahead of an announcement from Defence Minister Peter Dutton regarding defensive military assistance to Ukraine in Brisbane, Australia, April 8, 2022. AAP Image/Russell Freeman via REUTERS ATTENTION EDITORS - THIS IMAGE WAS PROVIDED BY A THIRD PARTY. NO RESALES. NO ARCHIVE. AUSTRALIA OUT. NEW ZEALAND OUT

With the West’s provision of anti-aircraft weaponry, Ukraine has been able to prevent Russia from using its far more advanced air force to establish dominance in the skies since Moscow’s invasion began on Feb. 24.

But Ukraine has also sought to move away from its dependence on Russian aircraft by securing US fighter jets and training for its pilots on how to fly them. Ukraine’s air force has publicly flagged its hopes for F-15s and F-16s.

Brown, speaking as he flew to Aspen, Colorado for a security forum, acknowledged that discussions within the US military and its allies were underway.

“You want to build a long-term plan on how do you build their air force and the air force that they’re going to need for the future,” said Brown, a pilot himself, without confirming any decisions on the way forward.

Brown’s comments came days after lawmakers in the House of Representatives moved forward a measure that, if it passes other hurdles, would authorize $100 million to train Ukrainian pilots and maintainers on US combat aircraft.

Brown did not comment on the legislation. He also declined to speculate on timelines or what kinds of Western aircraft might be best suited for Ukraine.

But he stressed that future training for Ukrainian pilots was a complex question, one that would need to take in account the state of the war and the ability for Kyiv to remove pilots from the fight to undergo lengthy instruction.

“How can you make that transition from where we are today to where we are going to want to be in the future? To allow folks to leave to go train,” he said.

Asked how long it might take for a Ukrainian pilot to transition to US fighter aircraft, Brown noted that a US pilot could train on a new type of aircraft in a matter of perhaps two to four months. Transitioning from a Soviet system would be “a little harder,” he said.

“I feel pretty confident there are some of our NATO partners who have done that, can actually have lessons that they learned that can be helpful to the Ukrainians to help them figure out how to best make that transition,” Brown said.