US, allies vow all options on table against North Korea 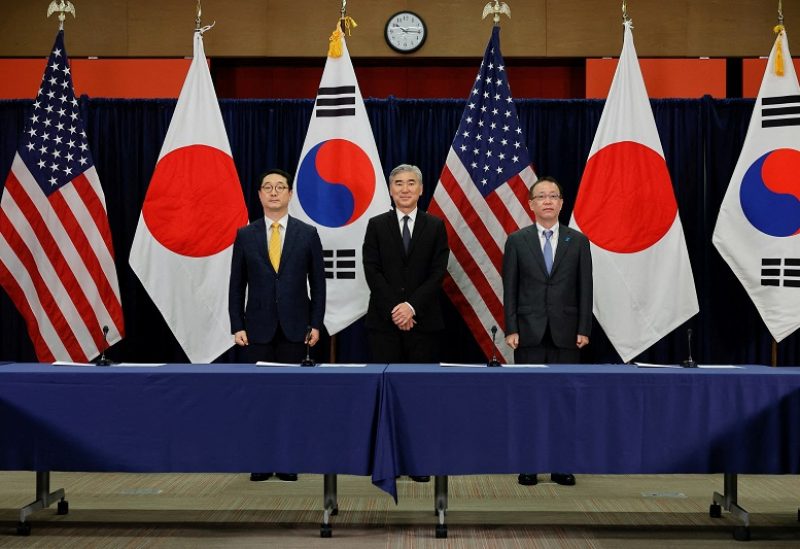 In the wake of an unprecedented blitz of missile tests by Pyongyang that has sent regional tensions spiralling, the United States, South Korea and Japan vowed Tuesday to consider all options against North Korea, including counterstrikes,
The flurry of North Korean launches include last month’s test of its most advanced intercontinental ballistic missile and a missile that flew across the de facto maritime border and landed near South Korean waters for the first time since the Korean War.
US special representative for North Korea Sung Kim held talks with South Korean counterpart Kim Gunn and senior Japanese foreign ministry official Takehiro Funakoshi in Indonesia’s capital Jakarta, where they warned of Pyongyang’s threat to regional security.
“We will examine all options, including counterstrike capabilities,” said Funakoshi, of the Japanese foreign ministry’s Asian and Oceanian Affairs bureau.
The talks, which follow meetings in Tokyo and Seoul this year, were held at the US embassy in Jakarta, where Sung Kim also serves as ambassador to Indonesia.
The envoys’ pledge comes after their nations slapped sanctions on North Korean officials and groups this month to punish Kim Jong Un’s regime for the wave of weapons tests.
Gunn said Pyongyang had become more aggressive in threatening nuclear action and that the three allies would harmonise sanctions despite Chinese and Russian vetoes of a US-led bid to tighten them at the UN earlier this year.
“North Korea is becoming more aggressive and blatant in its nuclear threat,” said the South’s envoy.
“North Korea’s further provocation will be met with a firm and united response from the international community.”
Washington, Seoul and Tokyo have bolstered their security cooperation on North Korea to new highs as a result of the heightened missile activity, according to Funakoshi.
“We urge North Korea to sincerely respond to our call for dialogue. Our commitment to denuclearization will remain unwavering,” he said.
Seoul and Washington have spent months warning that Pyongyang is gearing up to conduct what would be the country’s seventh nuclear test.
After overseeing the launch of the Hwasong-17 “monster” missile in November, Kim declared he wanted North Korea to have the world’s most powerful nuclear force.
At a politburo meeting last month, Kim said 2023 would be a “historic year”, marking 75 years since the country’s founding, according to the official Korean Central News Agency.