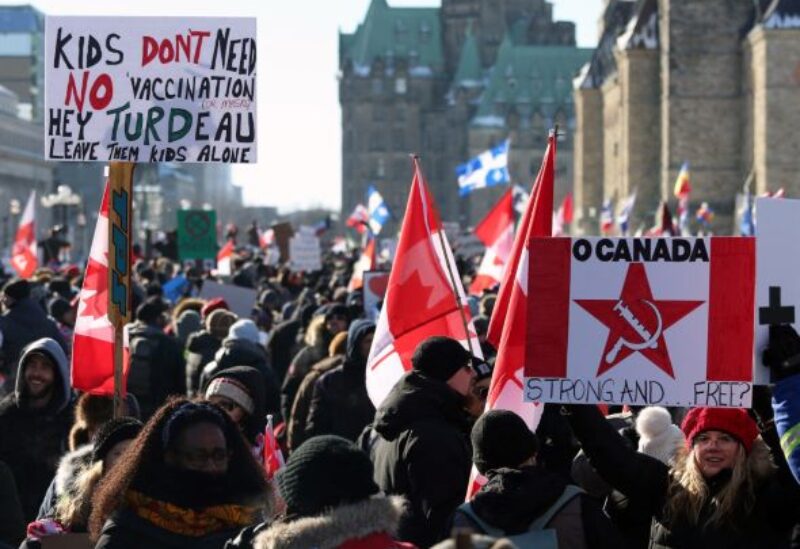 After COVID demonstrations closed off the vital international trade corridor, the Ambassador Bridge, which connects the US and Canada, reopened late Sunday.

The owner of the bridge, Detroit International Bridge Co., told the AP news agency and local Detroit outlets that “the Ambassador Bridge is now fully open allowing the free flow of commerce between the Canada and US economies once again.”

A Canadian mayor said earlier in the day that the standoff on the key US border bridge was at an end.

Windsor City Mayor Drew Dilkens tweeted: “Today, our national economic crisis at the Ambassador Bridge came to an end. Border crossings will reopen when it is safe to do so and I defer to police and border agencies to make that determination.”
Canadian police successfully cleared protesters and vehicles that had blocked the vital trade route.

The US, which pushed for a quick resolution to the border blockade, praised the actions of Windsor police.

Windsor Police upped the ante on Sunday by placing bridge protesters in handcuffs, towing vehicles and reclaiming clogged lanes, saying that “there will be zero tolerance for illegal activity.”

In total, between 25 and 30 people were arrested by authorities.

“The arrested persons are all facing a charge of mischief. Multiple vehicles within the demonstration area were also seized,” Windsor Police said in a statement.
The arrests came after a tense standoff between Canadian police and demonstrators, which escalated on Friday when a court order and threats of detention failed to end the blockade.

Access to the key trade route between Canada and the US had been blocked as protests against coronavirus restrictions occurred in a number of Canadian cities, including the capital, Ottawa.

Some 180 protesters were blocking the Ambassador Bridge linking Windsor in the Canadian province of Ontario with the US city of Detroit, even after Canadian police succeeded in persuading demonstrators to move some trucks barricading the crossing earlier on Saturday. A first arrest was made by Windsor police on Saturday evening for a criminal offense in relation to the demonstration.
The bridge carries a quarter of all trade between the two countries, and the disruptions to traffic are believed to have caused millions of dollars in additional cost in the automobile sector alone so far. An order to end the blockade was issued by a court on Friday.
In Ottawa, where protesters have been encamped since a convoy of truckers arrived in late January, police say some 4,000 demonstrators were gathered on Saturday. Many people arrived from outside the city to join the protests.

Although politicians and residents have called for the protests to be dispersed, police say they are limited in what they can do.

They said a joint command center had now been set up together with the Ontario Provincial Police and the Royal Canadian Mounted Police.

Both federal and provincial leaders say they are not able to tell police what to do.
Prime Minister Justin Trudeau, who has called the protesters a “fringe” of Canadian society, has so far rejected calls to bring in the military. But his office has said authorities would not hesitate to pull out all the stops, if necessary.

“The prime minister stressed that border crossings cannot, and will not, remain closed and that all options are on the table,” it said in a statement late Saturday after Trudeau met with senior officials.

The protests in Ottawa have provoked complaints by many residents, with protesters often displaying loud or otherwise offensive behavior. On Saturday, some tore down a fence that had been erected around the National War Memorial after demonstrators urinated on it.