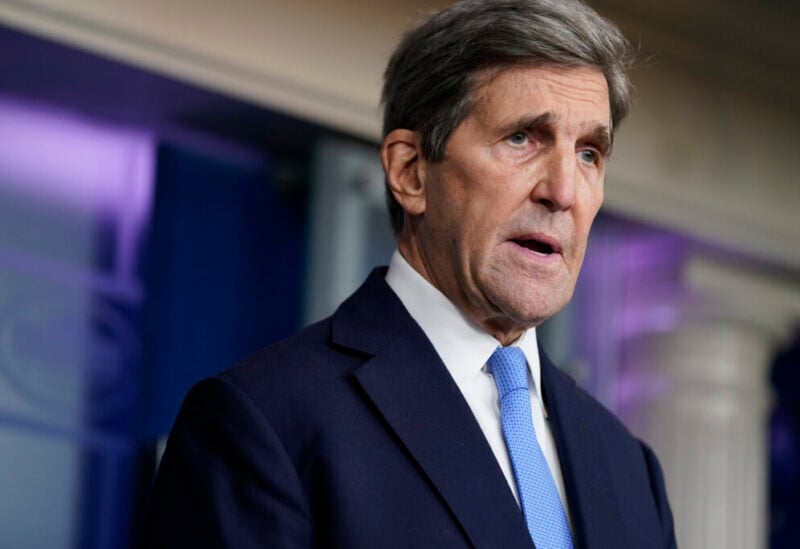 Mr Kerry will attend high-level discussions on advancing global action to halt climate change at the GCC and MENA Regional Dialogue For Climate Action, hosted by the UAE, in Abu Dhabi on Sunday.

This is his first visit to the Middle East since being appointed to the role. The veteran politician was made climate tsar by US President, Joe Biden, and has vowed to swiftly make up for America’s “lost years” in the battle to protect the environment.

Mr Kerry’s visit to the UAE comes in a critical year in the global fight to halt rising temperatures. A major international climate meeting covened by Mr Biden takes place in April  while the Cop26 climate change summit is being staged in Glasgow this November.

The UAE Regional Dialogue will include COP 26 President, Alok Sharma, together with high-level representatives from the GCC and Mena region, the Wam news agency reported on Thursday. The meeting will allow participants to exchange experiences in their response to climate change and to build momentum for increased global ambitions.

Wam reported that it will enable the US and the MENA region to examine new areas of collaboration in the field of climate change mitigation and adaptation, with the aim of transforming the climate challenge into an economic opportunity.

Core themes will include accelerating the deployment of renewable energy solutions, exploring the potential of new zero-carbon energy sources, such as green and blue hydrogen, maximising the impact of technologies such as carbon capture, and reducing the carbon emission intensity of hydrocarbon fuels.

Cop26 has been described as the most important summit since Paris in 2015. Agreed in 2015 and now signed by 195 countries including the UAE, the Paris deal aims to limit global average temperature increase to 1.5°C above pre-industrial levels. But experts warned the world faces increases of more than 1.5°C within 10 years if countries fail to act. The UAE was the first Gulf country to sign up to the Paris climate accords.

In advance of the talks in the UAE on April 4, Mr Sharma said: “It is vitally important that the world works together to tackle climate change. That means countries coming forward with net zero targets and near term emissions reduction targets that keep 1.5 degrees within reach. The transition to a clean economy is one which can benefit us all: through creating jobs, spurring sustainable development, and cleaning our air.

“We are already beginning to see progress and countries in the MENA region are well placed to take advantage of the economic opportunities of this transition. However, the consequences of climate change are already being felt across the region, and the UK will use its COP26 Presidency to build momentum on adaptation to help to keep countries, communities and people safe from the impacts of climate change.

The meeting came just days after the former US secretary of state took up the role.

“I look forward to strong and productive collaboration on tech, investment and regional leadership as we work together to ensure global action on deep decarbonisation.”

In comments reported on Thursday by Wam, Dr Sultan said: “We look forward to welcoming Special Envoy Kerry and COP26 President Alok Sharma, along with Ministers and high level representatives of the key economies of the GCC and MENA region to Abu Dhabi for this important dialogue. The UAE has demonstrated a longstanding commitment to progressive climate action and sought to promote sustainable development throughout the region.

“By coming together for this dialogue, I believe we can create greater momentum for progress. The UAE views climate action as an opportunity for economic development, while contributing practical solutions to a global problem that affects us all. As the world seeks new pathways to ‘building back better’ in the wake of the COVID-19 pandemic, Special Envoy Kerry’s visit will help consolidate efforts on smart sustainable solutions with tangible benefits for the global community,” he added.

“We are already seeing great examples of climate leadership throughout our region, including the recently announced initiative by our brotherly neighbours in Saudi Arabia. The Regional Climate Dialogue will provide a constructive platform for the MENA region to unite around progressive, practical solutions that can help the world reach global climate goals, while also fostering innovation for sustainable growth.”

Emissions fell worldwide last year as many countries implemented Covid-19 lockdowns. But experts predict that the reductions won’t last. Cop26 was postponed in 2020 due to the pandemic.

Abdullah Al Nuaimi, the UAE’s Minister of Climate Change and Environment, said international collaboration was important for the talks to succeed and the UAE was dedicated to accelerating its transition to a green economy as part of its Covid-19 recovery plans.

The UAE has set out targets to limit greenhouse gas emissions  over the next decade as part of its commitment to the Paris Agreement on climate change.

The country aims to cut emissions by nearly a quarter by 2030 compared to “business as usual”, which does not take into account the latest commitments.

The dialogue in Abu Dhabi will also consider policies for adaptation to the impacts of accelerating climate change trends that are of particular concern to the region, such as food and water security, desertification mitigation and environmental conservation, Wam reported.