US congressional delegation lands in Taiwan amid high tension with China 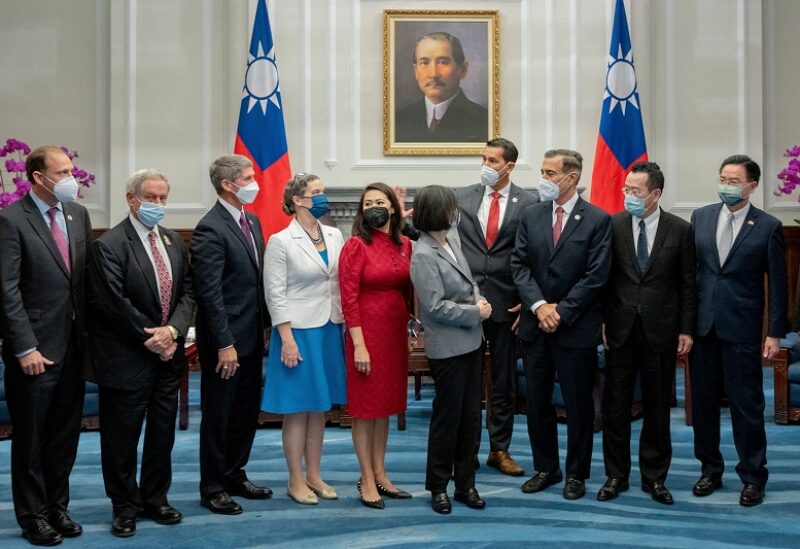 Taiwan President Tsai Ing-wen meets U.S. Representative Stephanie Murphy (D-FL) and other members of the U.S. delegation at the presidential office in Taipei, Taiwan September 8, 2022. Taiwan Presidential Office/Handout via REUTERS ATTENTION EDITORS - THIS IMAGE WAS PROVIDED BY A THIRD PARTY. NO RESALES. NO ARCHIVES.

A second American legislative delegation arrived in Taiwan, while tensions with China over its claims to the autonomous island remain high.

Since US House Speaker Nancy Pelosi’s visit in early August, a continuous stream of Americans has been to Taiwan to meet with government representatives.
Since then, China has increased its military intimidation of Taiwan by routinely sending warships, bombers, and even drones toward the island.

On Thursday, the eight-person, nonpartisan group will speak with Tsai Ing-wen, the president of Taiwan.
It is led by Stephanie Murphy, a Florida Democrat who is one of the legislators who introduced a bill that would permit the US to lend arms to Taiwan in support, similar to a bill that was enacted to lend weapons to Ukraine. The Biden administration gave its approval last week to a USD 1 billion arms deal with Taiwan.

The US government’s highest-ranking official to visit Taiwan in 25 years was Pelosi. In retaliation, China conducted extensive military drills that included launching missiles over the island and deploying ships through the Taiwan Strait’s middle, which had previously served as a demilitarised zone between the two sides. The missiles made some landings in the exclusive economic zone of Japan.

High-level international trips to the island are viewed as interference in Chinese affairs and a tacit acknowledgement of Taiwanese sovereignty by China. Some believed that China’s recent military exercises were a practice run for upcoming military action against the island, which US military leaders fear could happen in the next few years.

A US senator, another congressional delegation, as well as government representatives from Japan and Palau, visited Taiwan after Pelosi’s visit. Additionally, the governors of Arizona and Indiana paid trips with an emphasis on semiconductors, a sector that Taiwanese firms dominate.

Politicians from the US have described their visits as a gesture of support for Taiwan and democracy.