US heatwave: Wildfires rage in western states as temperatures soar 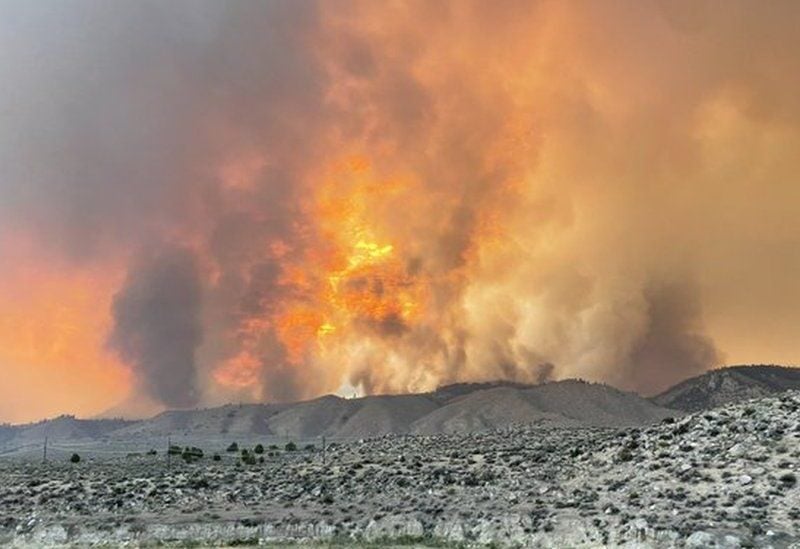 Wildfires are raging in the west of the United States as the region is hit by a heatwave that has brought record temperatures to several areas.

Communities have been told to evacuate as firefighters struggle to battle the blazes in the extreme conditions.

Two firefighters in Arizona died when their aircraft crashed while responding to a wildfire.

Firefighters battling the many wildfires in the region say the air is so dry that much of the water dropped by aircraft to quell the flames evaporates before it reaches the ground.

It comes just weeks after another dangerous heatwave hit North America, in which hundreds of sudden deaths were recorded, many of them suspected of being heat-related.

The region experienced its hottest June on record, according to the EU’s Earth observation programme.

Experts say that climate change is expected to increase the frequency of extreme weather events, such as heatwaves. But linking any single event to global warming is complicated.

However, a study by climate researchers said the heat that scorched western Canada and the US at the end of June was “virtually impossible” without climate change.

Arizona’s Bureau of Land Management paid tribute to the two “brave wildland firefighters” who died in a plane crash while performing aerial reconnaissance, command and control over the lightning-caused Cedar Basin Fire.

“Our hearts are heavy tonight with sincere condolences to families, loved ones and firefighters affected by this tragic aviation accident”, the agency said.

The accident occurred at around noon local time (19:00 GMT) on Saturday near the small community of Wikieup. Further information was not immediately available and the firefighters have not been officially named.

In the north of Nevada, near the border with California, people were evacuated from their homes as wildfires triggered by lightning strikes tore through parts of the Sierra Nevada forest region.

One fire, which more than doubled in size between Friday and Saturday, sent up a giant cloud of smoke and ash which, combined with the dry heat, generated its own lightning, according to the Los Angeles Times.

“As long as it’s this hot and we have these low humidities, it’s kind of hard to tell when and where we’re going to catch this,” Lisa Cox, information officer for the so-called Beckwourth Complex fires, told the newspaper.

In Oregon, a wildfire fanned by strong winds in the Fremont-Winema National Forest doubled in size to 120 sq miles (311 sq km) on Saturday.

The fire was threatening power cables that send electricity to California. Power grid operators in California have urged customers to conserve electricity by reducing their use of appliances and to keep thermostats higher during the evening when solar energy is diminished or no longer available.

Fires have also been burning in Canada’s western province of British Columbia amid unusually hot, dry weather. An entire village was wiped out in a blaze earlier this month after it recorded Canada’s highest ever temperature of 49.6C (121.3F).

The country on Sunday ordered new railway safety rules for areas where there is a high wildfire risk. The rules will require Canadian National Railway and Canadian Pacific Railway to take a number of precautions, including reducing train speeds when there is an extreme fire risk and removing combustible material near tracks.

Several areas in Nevada and California have matched or passed temperature records, according to preliminary data by the National Weather Service (NWS), and the extreme heat is expected to continue.

Millions of people are under an excessive heat warning, with those affected urged to drink plenty of water and stay in air-conditioned buildings where possible.

Cooling centres – air-conditioned public spaces – have been set up in some areas to help residents get relief from the heatwave.

Heat warnings have also been issued in parts of Canada, with those affected urged to consider rescheduling outdoor activities for cooler periods of the day, and monitor for symptoms of heat stroke or heat exhaustion.