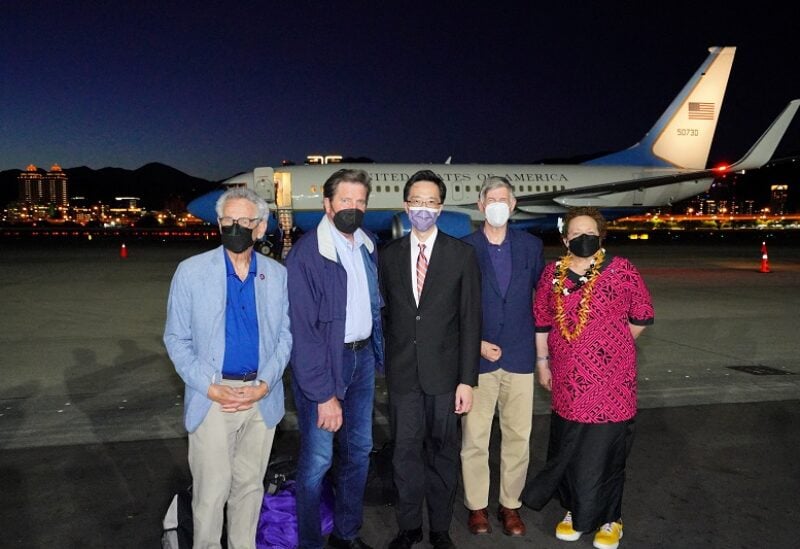 In a further sign of support among American lawmakers for the self-governing island that China claims as its own territory, Taiwan’s President Tsai Ing-wen met on Monday with a delegation of US Congress members.

Taiwanese media showed the delegation arriving for the talks, but details of the meeting were not immediately released.

The unannounced two-day trip came after Beijing sent warships, missiles and jets into the waters and skies around Taiwan, a self-ruled democracy that China’s leaders claim and have vowed to one day seize.

The delegation arrived on the island less than two weeks after US House Speaker Nancy Pelosi’s visit to Taiwan, which prompted days of threatening military exercises by China, including the firing of missiles over the island and into the Taiwan Strait.

China has also sent warplanes and navy ships across the waterway’s median, which has long been a buffer between the sides that separated amid civil war in 1949. China regards formal contacts between US politicians and the island’s government as support for its independence from Beijing.
The five-member delegation has been led by Democratic Senator Ed Markey of Massachusetts and the group will meet with other government and private sector representatives. Reducing tensions in the Taiwan Strait and investments in Taiwan’s crucial semiconductor industry are expected to be key topics of discussion.

The other members of the delegation are Republican Representative Aumua Amata Coleman Radewagen, a delegate from American Samoa, and Democrats John Garamendi and Alan Lowenthal from California, and Don Beyer from Virginia.

Visits by senior US officials to Taiwan have happened for decades and even Pelosi’s trip was not without precedent with previous house speaker Newt Gingrich visiting the island in 1997.

But the frequency and profile of US visits has increased both under former President Donald Trump and current President Joe Biden.

Taiwan has also seen a flurry of delegations visit from Europe and other western allies in recent years, partly in response to Beijing’s more aggressive stance under Chinese President Xi Jinping.