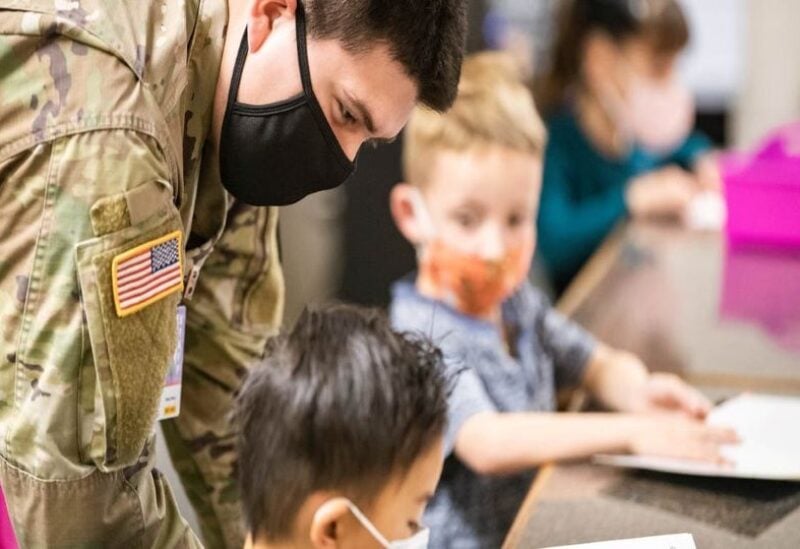 Army National Guard Spc. Michael Stockwell had previously patrolled a ring of checkpoints and barriers surrounding New Mexico’s state Capitol following the January 2021 insurgency in Washington and surveilled a desert part of the US-Mexico border during a migrant influx.

Stockwell is currently serving as a substitute science teacher at Alamogordo High School, where he assists pupils with assignments.

Hundreds of National Guard Army and Air Force personnel in New Mexico have been called in to help with an emergency unlike any they’ve seen before: a teacher and school staffing shortfall that has put schools across the country to the test during the coronavirus outbreak.

While many other states and school districts have requested replacement instructors in the wake of omicron-driven outbreaks, New Mexico has gone it alone in mobilizing its National Guard. Guard troops have swapped mission briefs for lesson plans to work for school systems in 36 of the state’s 89 school districts.

Some students mistook Stockwell for a visitor when he stepped into the freshman science class wearing camouflage fatigues and military boots.

“I was like, ‘Whoa,'” recalled Lilli Terrazas, 15, of Alamogordo, as he started recording attendance. “I was a little nervous because, you know, there was a dude in a uniform.” It was, nevertheless, enjoyable. He was of assistance to me.”

Approximately 80 military personnel have volunteered to work in schools. Background checks and brief training courses for substitute instructors were completed by the troops. They don’t need to know much about the curriculum as substitutes, but they do need to pay attention to the students.

Stockwell has been standing in for his children’ teacher since late January, when she relocated to an administrative position at another school. He shuffled down the rows of school desks one recent day, kneeling to aid children with assignments calculating the depth of the ocean.

Gov. Michelle Lujan Grisham, a Democrat, has called in the National Guard to aid with the severe teacher shortages in a state that, like many others, has failed to find enough teachers. This school year, at least 100 schools have reported shutting for at least one day.

Last October, New Mexico had a rise in teacher retirements, and there are currently roughly 1,000 unfilled teaching positions in the state of 20,000 teachers. Grisham highlighted that the deployment of the guard is just temporary, and that state officials are striving to strengthen the teaching force and school employees through greater salary and other measures.

The teacher shortage in Alamogordo reached a nadir on January 13, when 30 instructors, or almost a third of the teaching staff, were absent due to illness, professional training, or family issues.

Raeh Burns, one of two Alamogordo High School secretaries entrusted with filling teaching spots each morning, said, “Everybody was enjoying their holiday and stuff like that, and then they came back and were sick.” “I know I’ll see Mr. Stockwell every morning and that he’ll be OK traveling wherever I need him to go.”

Concerns have been expressed in certain areas about soldiers entering classrooms. According to school district spokesperson Cody Dynarski, the Santa Fe school district was asked if soldiers would wear uniforms and carry guns. The use of firearms was never an option. Soldiers will be dressed in civilian clothes, according to the district.

Ultimately, despite their demands, Santa Fe and Albuquerque, two of the largest metropolitan school districts, did not receive any soldiers because the deployments prioritized smaller, more rural school districts.

When given the option, some soldiers have chosen military fatigues over civilian clothing in the classroom to command respect, especially if they are not much older than their students.

Cassandra Sierra, 22, of Roswell, who has worked as a substitute teacher at a high school in Hobbs, said, “I think I appear like an 18-year-old out of uniform.”

Sierra’s day job as a student coordinator at a military boarding school in Roswell has prepared her well for her role as a substitute.

“All kids need is patience,” she explained. “I guess it’s just because I’m patient.”

Students at a middle school on the Holloman Air Force Base in Alamogordo are accustomed to seeing people in uniform, but not in their classrooms.

“I was thinking to myself, ‘Oh, we have someone in uniform who is going to teach us.’ That’s kinda awkward.’ “It was strange,” Andrew George, 12, said of his computer classes, which were taught by a woman who had been in battle and had led an unit overseas. “I was thinking, ‘Oh yeah, this is going to be fun,’ once she introduced herself.”

When she’s not training or serving with the guard, Lt. Amanda Zollo works in the 911 dispatch center in Albuquerque. During a cybersecurity session, she kept pupils focused by having them create and then try to break each other’s passwords.

She was filling in for a teacher who couldn’t get childcare. Whitney Anderson, the administrator, noted that having Zollo’s help meant she didn’t have to take over a classroom for the first time that week.

Zollo doesn’t discuss her work as an infantry officer with her students, which she defines as “engaging with and eliminating the enemies of the United States in close-quarter warfare” after a nervous giggle.