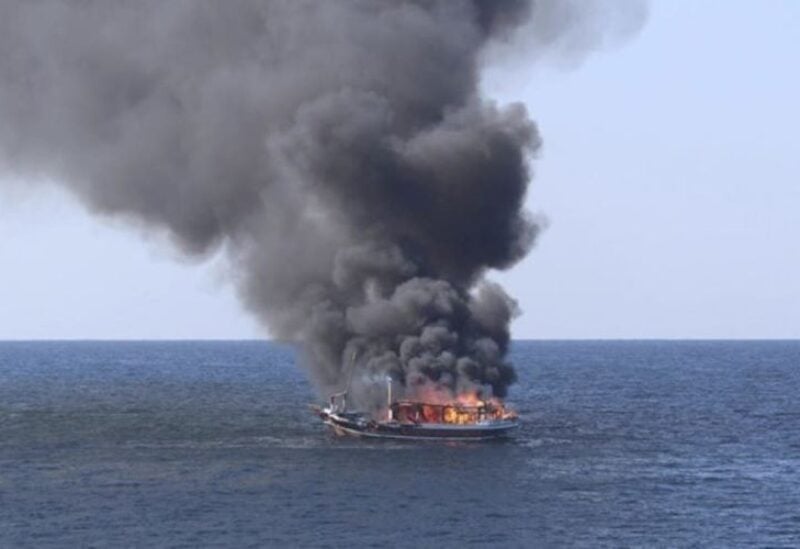 In this handout photograph from the US Navy, a traditional dhow sailing vessel suspected of smuggling drugs burns in the Gulf of Oman

The US Navy said on Thursday that it had rescued five Iranians accused of drug smuggling after they allegedly set fire to their cache on board a traditional sailing vessel off the coast of Oman, however one person is still missing.

The Navy released aerial surveillance footage of the dhow as it traversed the Gulf of Oman on Wednesday.

After people on board supposedly ignited the fire, smoke reportedly ascended from the ship, and an explosion soon after shook the ship.

Later, sailors from the patrol vessel USS Sirocco came and rescued the soldiers. Over 1,745 kilograms (3,850 pounds) of hashish, 500 kilograms (1,100 pounds) of methamphetamine, and 30 kilograms (66 pounds) of heroin were also discovered by sailors. The discovered pharmaceuticals were estimated to be worth about $15 million by the Navy.

According to Commander Timothy Hawkins of the United States Navy’s Mideast-based 5th Fleet, sailors estimate that represented only half of the narcotics on board, with the remainder burning up or sinking with the vessel.

According to the Navy, the five Iranians who were rescued got medical care and were turned over to authorities in Oman. As of Thursday, Iran had yet to acknowledge the occurrence.

The Navy and partner troops in the region launched anti-narcotic patrols around the Middle East’s waterways. Dhows are frequently used by smugglers to transport heroin from Afghanistan and other contraband surreptitiously across the region.

For years, Reuters and other news outlets have reported an upsurge in the activities of Iranian procurers transferring items over the treacherous waterways between Iran and Oman through “shooties,” a colloquial word for these smugglers.