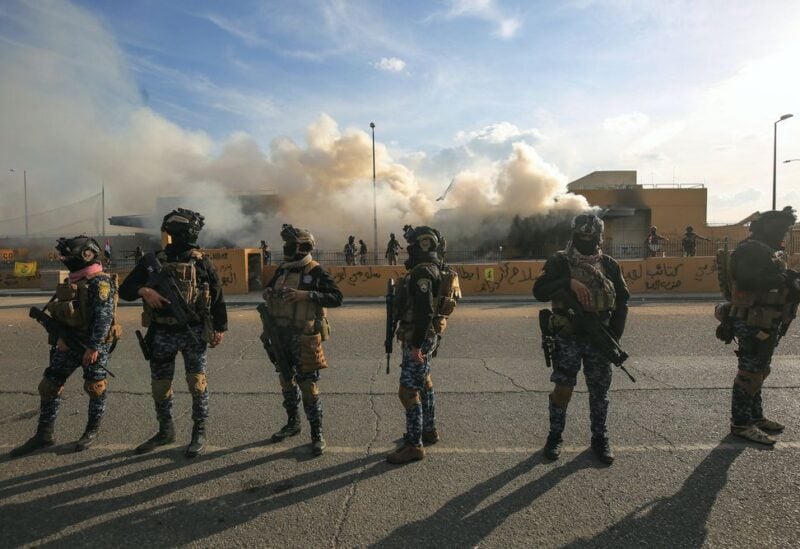 Iraqi security forces are deployed in front of the US embassy in the capital Baghdad, after an order from the Hashed al-Shaabi paramilitary force to supporters to leave the compound on January 1, 2020. - Thousands of Iraqi supporters of the largely Iranian-trained Hashed had encircled and vandalised the embassy compound yesterday, outraged by US air strikes that killed 25 fighters of the military network over the weekend. (Photo by AHMAD AL-RUBAYE / AFP)

On the eve of Iraqi Prime Minister Mustafa Al Kadhimi’s visit to Washington this month, top US diplomat in the Middle East on Wednesday called on the Iraqi government to crack down on Iran-backed militias and hold them accountable for the disappearances and assassinations of Iraqi human rights and civil society activists

“We’re also talking at every chance that we can with the Iraqi government about their requirement, about their moral duty to protect peaceful protesters and civil society activists,” said Joey Hood, acting assistant secretary of state for Near Eastern affairs

“We have no doubt that anti-democratic armed militia groups are behind these cowardly acts, and targeting of human rights and democracy advocates has to end. And we’re going to bear witness to this. And we’re going to encourage the Iraqi government to take on those militias until we do and bring them to justice.”

Speaking at a panel on Iraq hosted by the Washington Institute for Near East Policy, Mr Hood noted that last week marked the anniversary of the assassination of Hisham Al-Hashimi, an Iraqi expert on extremists groups who was gunned down in Baghdad.

The Iran-backed militia Kataib Hezbollah is widely believed to be behind Al Hashimi’s assassination.

Ihab A- Wazni, who was assassinated in May, was a leader in Iraq’s popular anti-government protest movement and a critic of Iran.

Al Wazni’s assassination added further fuel to the protests, which began in 2019 over deteriorating economic conditions and continuing electricity shortages. After thousands rallied to protest his death in Baghdad, Iran-backed militias shot at and beat the demonstrators, killing one and injuring dozens of others.