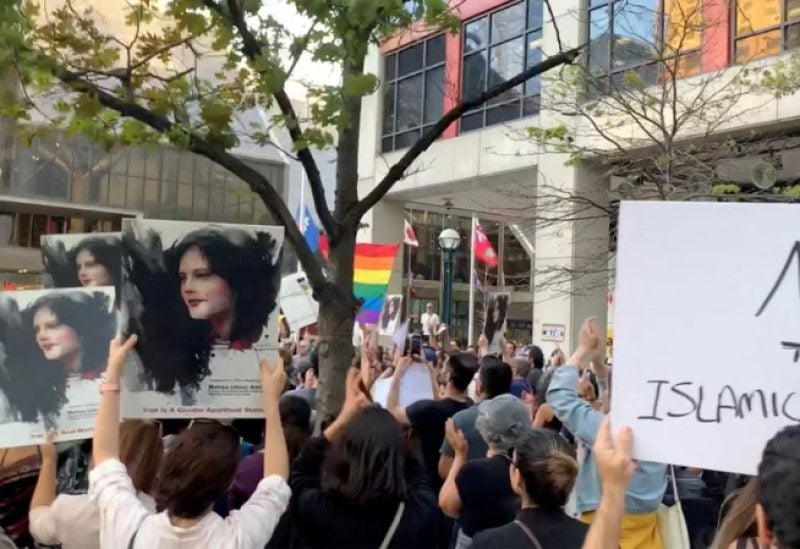 People attend a protest in solidarity with the women in Iran, following the death of Mahsa Amini, in Toronto, Canada, September 19, 2022 in this screen grab obtained from social media video obtained by REUTERS/File Photo

As the US looks for ways to support genuine, independent investigations into Iranian human rights violations, the Iranian protests that were triggered by the murder of a young lady in police custody will be the focus of the United Nations next week.
A note outlining the event, seen by Reuters, states that the US and Albania will hold a non-formal UN Security Council meeting on Wednesday. Shirin Ebadi, the Iranian campaigner and recipient of the Nobel Peace Prize, and Nazanin Boniadi, an actress, are scheduled to speak.
“The meeting will highlight the ongoing repression of women and girls and members of religious and ethnic minority groups in Iran,” the note said. “It will identify opportunities to promote credible, independent investigations into the Iranian government’s human rights violations and abuses.”
Other UN member states and rights organisations are welcome to the meeting, which will also feature independent UN investigator Javaid Rehman on the subject of human rights in Iran.
Since the death of Mahsa Amini, a 22-year-old Kurdish woman, in police custody last month, Iran has been rocked by protests. One of the most audacious challenges to the clerical regime since the 1979 revolution, the unrest has evolved into a popular revolt by Iranians from all societal strata.
The turmoil has been attributed to Iran’s foreign adversaries and their agents.
The United States and its allies, according to Iran’s ambassador to the UN in New York, have abused their influence “to pursue their political agenda.”