US supports Abraham accords but Israel needs to engage with Palestinians: Blinken 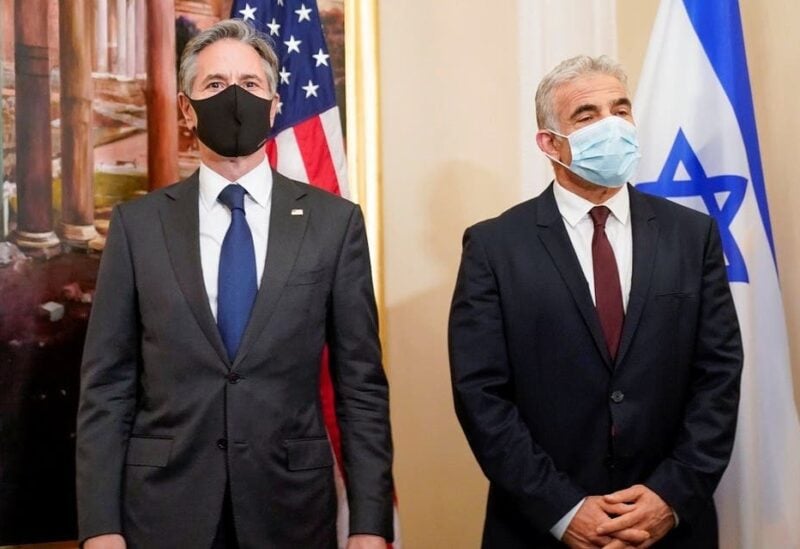 US Secretary of State Antony Blinken and Israeli Foreign Minister Yair Lapid pose for a picture during their meeting in Rome, Italy, June 27, 2021. (Reuters)

US Secretary of State Antony Blinken on Sunday said the United States supports Israel’s normalization accords, but they cannot be a substitute for engaging in issues between Israelis and Palestinians.

Lapid said Israel has “serious reservations” about the Iran nuclear deal hammered out in Vienna. Lapid described an upcoming trip to the United Arab Emirates as “historic.”

Israel also said on Sunday that it has serious reservations about the Iran nuclear deal being put together in Vienna, Lapid told his American counterpart, as he pledged to fix “the mistakes made” between the two countries over the past few years.

Iran and the United States have been holding indirect talks on reviving the 2015 nuclear deal between Tehran and major powers that imposed restrictions on Tehran’s nuclear activities in exchange for lifting international sanctions.

Israeli Prime Minister Naftali Bennett, a nationalist atop of a cross-partisan coalition, has hewed to the opposition of his conservative predecessor, Benjamin Netanyahu, to the 2015 Iranian nuclear deal, whose caps on projects with bomb-making potential Israel deemed too lax.

“Israel has some serious reservations about the Iran nuclear deal that is being put together in Vienna. We believe the way to discuss those disagreements is through direct…conversations, not in press conferences,” Lapid said in his brief remarks before the meeting in Rome began. He also said Israel will be working to improve ties with Washington.

“In the past few years, mistakes were made. Israel’s bipartisan standing was hurt and we will fix those mistakes together,” he added.