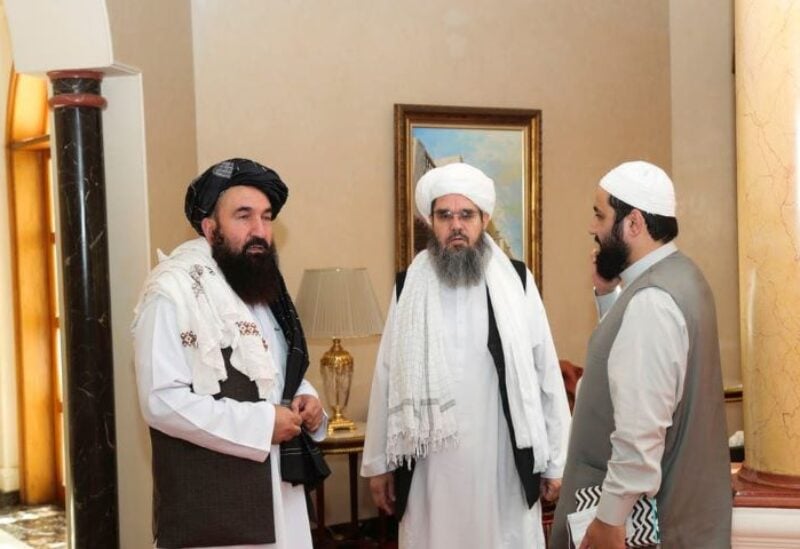 Taliban delegates, Shahabuddin Delawar and Khairullah Khairkhwa are pictured ahead of the meeting with U.S. and European delegates in Doha

Months after the two parties last met in the Qatari capital in March, Talks between the United States and the Taliban continued in Doha earlier this week to discuss earthquake aid, the State Department said Friday.

The Taliban is seeking a way to unlock some of the country’s foreign reserves — currently frozen by the United States — following a devastating earthquake last month, with the United States looking for assurances the money would go to help the population, said AFP.

During the meetings Wednesday and Thursday, the United States reiterated an earlier pledge of $55 million in new assistance for earthquake relief, the State Department said in a statement Friday.

And “the two sides discussed in detail US actions to preserve $3.5 billion in Afghan central bank reserves for the benefit of the Afghan people,” the statement said, money which the White House said last week the US was “urgently” working to sort out.

“The United States expressed condolences for the loss of life and suffering in Afghanistan caused by recent earthquakes,” the State Department said of the meeting, which was led by Special Representative for Afghanistan Thomas West.

According to the State Department, US representatives also pushed the Taliban authorities on women’s rights — a sticking point which led Washington to cancel talks in Doha in March, when the group closed girls’ secondary schools in Afghanistan.

“The United States supports the Afghan people’s demands that girls be allowed to return to school and that women be allowed to work, contribute to the country’s economic growth, and move and express themselves freely,” the statement said.

The hardline Islamist Taliban took over in August 2021 after the United States gave up a 20-year military effort.

Washington at the time froze $7 billion in reserves and the international community halted billions in direct aid that Afghanistan and its population of roughly 40 million people had relied on.

The currency has collapsed and the country descended into a serious economic crisis, although some assistance has been restored.

The Taliban is still considered a terrorist group by the United States, which has insisted that any improvement of relations would be dependent on meeting key concerns.