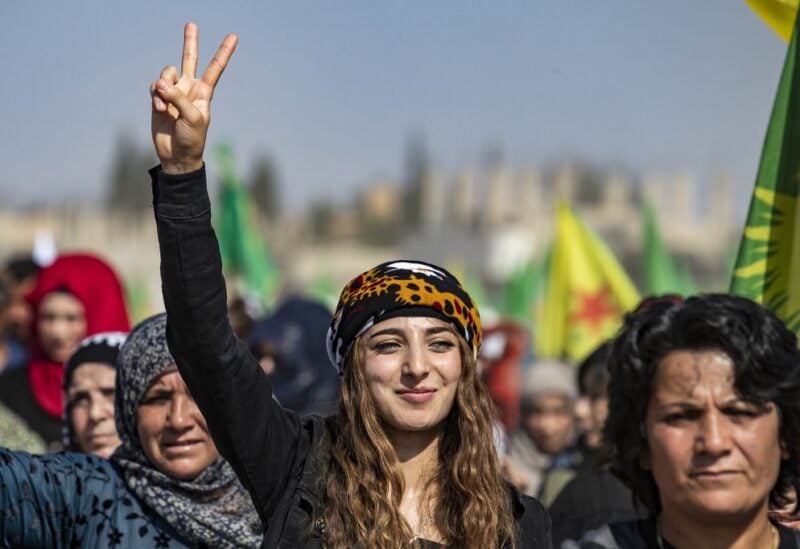 A Syrian Kurdish woman flashes the v-sign during a demonstration against Turkish threats in Ras al-Ain town in Syria's Hasakeh province near the Turkish border on October 9, 2019. - Syrian Kurds called on Damascus ally Moscow to facilitate "dialogue" with the regime, following threats of a Turkish invasion of northeastern Syria. (Photo by Delil SOULEIMAN / AFP)

A push by Turkish authorities to dissolve the pro-Kurdish Peoples’ Democratic Party (HDP) party, if successful, would “further undermine democracy” in Turkey, the US State Department said on Wednesday.

In a statement, the department also called the stripping of HDP deputy and human rights advocate Omer Faruk Gergerlioglu of his seat “troubling.”

President Recep Tayyip Erdogan has long portrayed the HDP as the political front of banned Kurdish militants who have been waging an insurgency against the Turkish state that has claimed tens of thousands of lives since 1984.

The party denies formal links to the militants and says it is coming under attack because of its fervent opposition to Erdogan’s 18-year rule.

Wednesday’s request came from Bekir Sahin – a prosecutor for the Supreme Court which is now investigating the party – who argued that the HDP is trying “to destroy the indivisibility between the state and the people”, the Anadolu state news agency reported.

The political and legal assault on the HDP intensified after a truce between the Kurdish militants and Erdogan’s government broke down in 2015.

It grew even stronger after Mr Erdogan survived a failed coup attempt in 2016 that was followed by a sweeping political crackdown that saw tens of thousands jailed or stripped of their government jobs.

Those detained include two former HDP co-chairs who were jailed in 2016 and face decades in prison.

Most of the 65 HDP mayors elected in the predominantly Kurdish southeast in 2019 have been replaced by government-appointed trustees.

The Court of Cassation opened an investigation into the party on March 2, two weeks after Erdogan accused Kurdish militants of killing a group of Turkish captives in Iraq during a failed government rescue operation.

Last month parliament also began examining whether to lift the immunity of 25 lawmakers, including 20 from the HDP.

Omer Faruk Gergerlioglu, a leading HDP member and human rights defender, was stripped of his seat earlier on Wednesday after being controversially convicted of disseminating “terrorism propaganda” in a social media pos