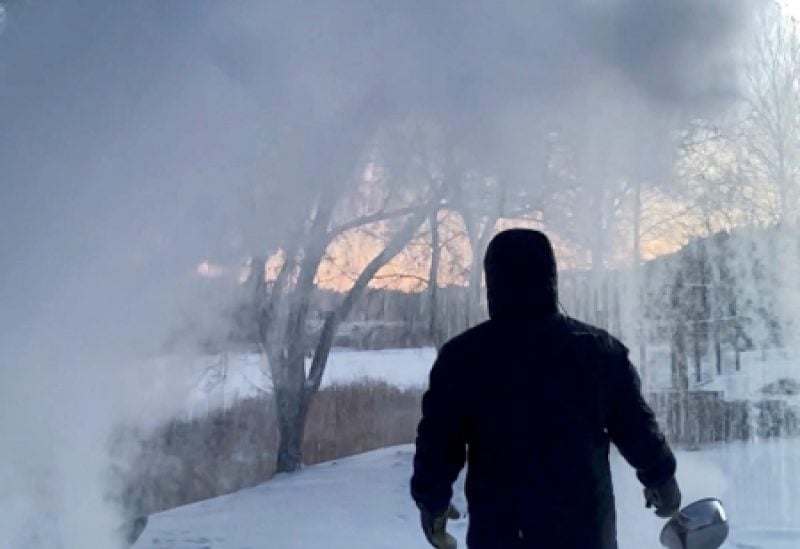 A man tosses hot boiling water in the snow in Carbon County, Montana, U.S. December 22, 2022 in this still image obtained from a social media video. Twitter/@MementoMori_JMJ/via REUTERS THIS IMAGE HAS BEEN SUPPLIED BY A THIRD PARTY. MANDATORY CREDIT. NO RESALES. NO ARCHIVES.

With a snow storm expected from late Thursday night into Friday morning, US National Weather Service (NWS) on Thursday warned of “dangerous cold” for much of the country,
The weather service warned that an Arctic blast would bring heavy snowfall to the Midwest, the Great Lakes and the Northeast through at least Saturday.
This means that more than 200 million of the country’s 335 million inhabitants will remain under varied weather advisories during the Christmas weekend, which is set to be the coldest the country has seen in decades.
Temperatures plunged dramatically on Thursday, with one area in the state of Montana, which shares its northern border with Canada, having recorded temperatures as low as -50 degrees Fahrenheit (-45 degrees Celsius).
Besides Montana, North and South Dakota, Nebraska and Wyoming were among states experiencing biting cold.
With the snowy part of the storm still to come, NSW predicted that the heaviest snow would likely be seen in the Great Lakes, near the US-Canada border, with 2 to 4 feet (61 to 122 centimeters) of snow in total expected to fall.
Blizzard conditions in some areas and “dangerous” wind chills could become life-threatening if people found themselves stranded outdoors.
Holiday plans during one of the year’s busiest travel periods are set to be impacted, with thousands of flights were canceled through Friday.
More than 2,350 flights had been canceled on Thursday, and another 2,120 flights on Friday have been canceled too, according to flight tracking website FlightAware.
Another 8,450 flights were delayed Thursday, according to the website.
Amtrak, which is America’s passenger rail system, canceled dozens of trains through Christmas, disrupting travel for tens of thousands.
Authorities have raised concerns that power could be cut due to the storm and asked people to postpone travel.
More than 112 million people are estimated to travel 50 miles (80 kilometers) or more during the holiday season.
This year’s holidays travel chaos comes after the same period in 2021 was marred by COVID outbreaks among airlines’ staff that forced thousands of flight cancellations.
Forecasters are expecting a bomb cyclone — when atmospheric pressure drops very quickly in a strong storm — to develop near the US-Canada border.
The NSW forecast that “record-breaking cold and life-threatening wind chills over the Great Plains [would] overspread the eastern half of the Nation by Friday.”
The weather agency warned that temperatures would drop between -40 to -70 degrees Fahrenheit (-40 to -56 degrees Celsius), with strong gusts and heavy snow expected to cause damage to infrastructure and disrupt travel.
“Wind chills of this magnitude can cause frostbite in less than five minutes if precautions are not taken, with hypothermia and death also possible from prolonged exposure to the cold,” it said.
US President Joe Biden urged people across the country to take the weather warnings seriously.
“This is not like a snow day when you are a kid,” Biden warned Thursday after a briefing with federal officials. “This is serious stuff,” he said.