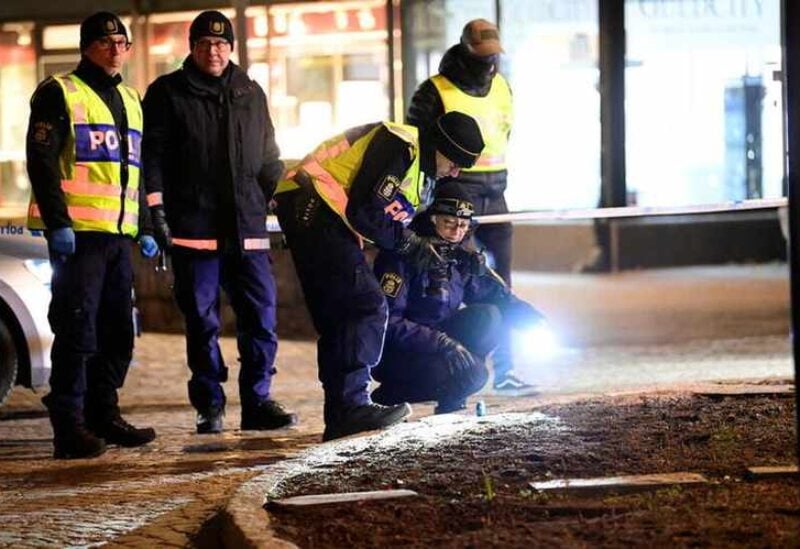 Police forensics team members work at a knife attack site where several people were injured before the suspect was shot by police and taken into custody in Vetlanda, Sweden March 3, 2021. TT News Agency/Mikael Fritzon via REUTERS THIS IMAGE HAS BEEN SUPPLIED BY A THIRD PARTY. SWEDEN OUT. NO COMMERCIAL OR EDITORIAL SALES IN SWEDEN

Three people who sustained life-threatening injuries in a knife-attack in the southern Swedish town of Vetlanda that left seven wounded were in stable condition on Thursday, local authorities said.

The attack on Wednesday afternoon is being investigated as attempted murder although investigators are also considering a possible “terrorism motive”, police said.

Adam Rullman, prosecutor in the case, said the prosecution authority unit handling terrorism-related cases had however assessed it would not take over the investigation.

All seven victims have been taken to hospital. The three with life-threatening injuries were now stable and two others were treated for serious injuries, authorities said.

A suspect, a man in his 20s, is also in hospital after police shot and arrested him.

The daily Dagens Nyheter and TV4 news channel reported that police later raided an apartment in Vetlanda believed to be the suspect’s home, removing evidence and speaking to neighbours.

Police have not identified the suspect but said he was known for minor crimes. The situation was quickly brought under control and there are no indications that anyone else was involved, it said.

Public broadcaster SVT said the suspect was a refugee from Afghanistan who arrived in Sweden in 2018. Police declined to comment on his nationality or identity.

“We are a community in shock,” Vetlanda mayor Henrik Tvarno told a news conference. “It’s a nightmare. This is incredibly tough for the relatives of the victims and for all of us.”

Tvarno did not comment on the identity of the victims or the suspect, nor give further details on the attack.

In April 2017, an Uzbek migrant who had pledged allegiance to the Islamic State militant group drove a truck into crowds of shoppers on a busy street in Stockholm, killing five people before crashing into a department store. He was arrested and later sentenced to life in prison.