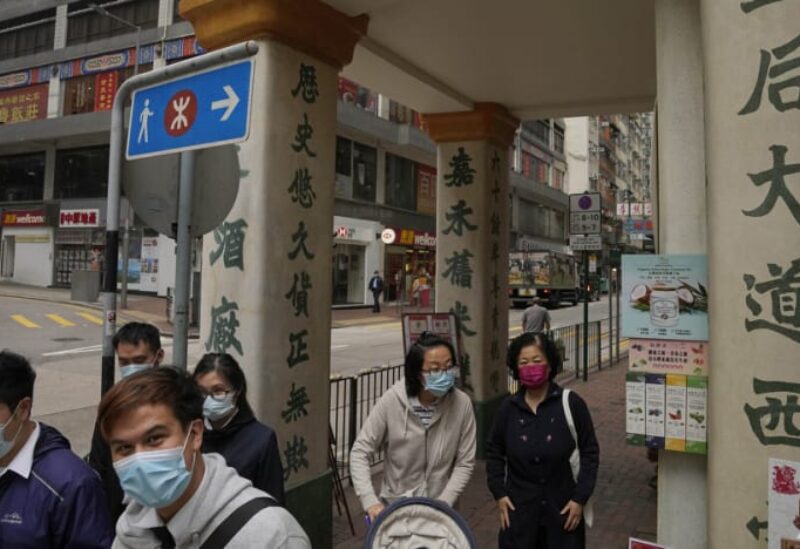 In an attempt to allow doctors, nurses and other personnel from the Chinese mainland to help combat a spiraling coronavirus outbreak, Hong Kong’s government invoked emergency powers on Thursday.

The densely populated metropolis is in the throes of its worst-ever Covid wave, registering thousands of cases every day, overwhelming hospitals and government efforts to isolate all infected people in dedicated units, AFP said.

Hong Kong authorities have followed a zero-Covid strategy similar to mainland China that kept infections mostly at bay throughout the pandemic.

But they were caught flat-footed when the highly infectious Omicron variant broke through those defenses, and have since increasingly called on the Chinese mainland for help.

“Hong Kong is now facing a very dire epidemic situation which continues to deteriorate rapidly,” the government said in its statement announcing the use of emergency powers.

Chinese mainland medics are not currently allowed to operate in Hong Kong without passing local exams and meeting licensing regulations.

The emergency powers “exempt certain persons or projects from all relevant statutory requirements… to increase Hong Kong’s epidemic control capacity for containing the fifth wave within a short period of time,” the statement said.

The move came after Chinese President Xi Jinping last week ordered Hong Kong to take “all necessary measures” to bring the outbreak under control, signaling Hong Kong would not be allowed to move towards living with the virus-like much of the rest of the world.

Allowing mainland medics to work in Hong Kong has been a source of debate for years.

Even before the pandemic, supporters argued it could alleviate shortages in the city’s stretched healthcare system.

Local medical practitioners in the past have objected, citing issues such as language and cultural barriers -– though critics have dismissed such talk as protectionism.

Hong Kong was supposed to operate as a semi-autonomous region from China, after the territory returned from British colonial rule in 1997.

But that autonomy was eroded in recent years as China crushed a democracy movement.

Hong Kong has recorded more than 62,000 Covid cases in the current wave, compared with just 12,000 during the two years before.

Health experts fear the real number is far higher because of a testing backlog and people avoiding testing for fear of being forced into isolation units if they are positive.

Over the last fortnight, stories have emerged of parents being separated from children and babies who test positive, as well as elderly patients lying on gurneys outside hospitals.

Around 1,200 healthcare workers have been infected as of Wednesday, according to the Hospital Authority.

The authority’s chairman Henry Fan told state media Monday he hoped the mainland government would send over doctors and nurses, because local manpower had been “exhausted”.

Hong Kong has ordered all 7.4 million residents to go through three rounds of mandatory coronavirus testing next month.

China is helping to build a series of isolation units and temporary hospital wards but it is unclear whether enough can be constructed in time.

Local modelling predicts the city might see as many as 180,000 infections and 100 deaths daily by mid-March.

During the 2019 protests, authorities used such powers to ban mask-wearing.

The following year, emergency orders were used to make mask-wearing mandatory during the pandemic.

The city’s disease prevention law has also been invoked to forbid public gatherings and a host of strict social distancing measures and business closure orders that have been in place on and off for two years.

City leader Carrie Lam has defended her approach, citing the intensity of the virus crisis.

“In an environment as urgent as this, we cannot let existing laws stop us from doing what we should do,” she said Tuesday.

“This is not the mentality for fighting a war.”