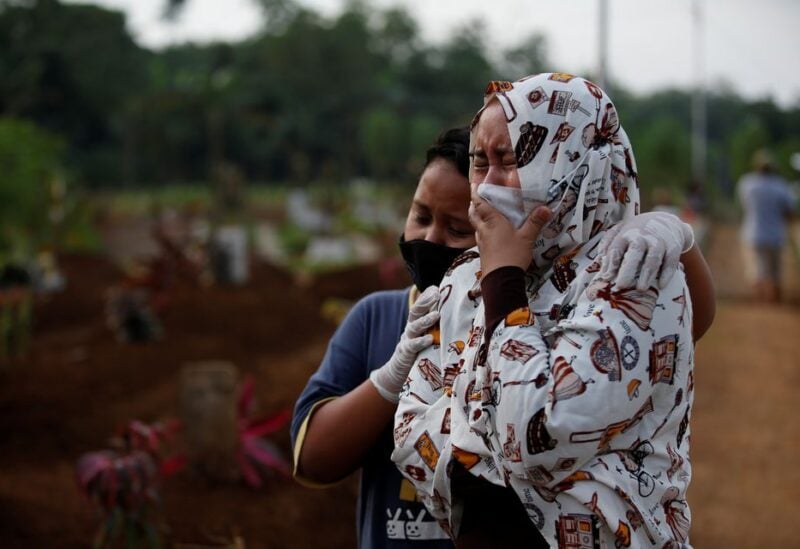 After his work as a taxi driver dried up because of Indonesia’s new coronavirus restrictions, Ardi Novriansyah offered his driving skills to help his home city’s buckling medical system.

Ardi, 41, is one of about 35 volunteers in Bogor, south of Jakarta, who recover the bodies of people that have died from COVID-19 while isolating at home.

Grabbing what sleep he can on a couch at the group’s headquarters in an unused building, Ardi has received call outs 24 hours a day over the past month. Ardi says his interest in humanity led him to take such a difficult job along with the camaraderie with his fellow volunteers.

“What’s important is that we have a desire to help as volunteers, for humanity,” he said.

The sight of dead bodies is something he adjusted to during an old job as an ambulance driver.

Indonesia is struggling to cope with a devastating wave of COVID-19 cases driven by the highly contagious Delta variant, which has left hospitals overflowing and meant many infected people unable to get a hospital bed simply die at home.

During a recent call out, Ardi’s team retrieved the body of the mother of Novi Bawazir, who said the family had been unable to get the 64-year-old into a bed in hospital as her oxygen levels plummeted.

“My mother had a 97 rate on the oximeter,” Novi said, referring to a device measuring oxygen saturation in the blood. “Within an hour, it was 37, and within minutes, she was gone.”

Donning white protective suits, Ardi and another crew member picked up her embalmed body, placed it in a coffin and prayed over it before driving to the cemetery for a burial.

Sadly, the sudden death of Novi’s mother is typical of what Ardi’s team is seeing at the moment.

Lapor COVID-19, a domestic group that collects pandemic data from the community, said that since June 625 people, mainly in Java, have died of COVID-19 outside of hospitals, the majority of them in self-isolation.

Rino Indira, the coordinator of the volunteer undertakers in Bogor, said a 24-hour hotline had been set up and the team was helping to plug a hole in the city’s strained healthcare system.

“This is an emergency situation in Bogor,” said Rino, who is also part of the local government’s COVID-19 task force, adding that his team is picking up about seven to nine bodies a day.

Indonesia, which is the world’s fourth most populous country with more than 270 million people, has this week seen infections hit a record daily high approaching 57,000, up sevenfold from a month ago, and the death toll has doubled from early July to about 1,000 per day.