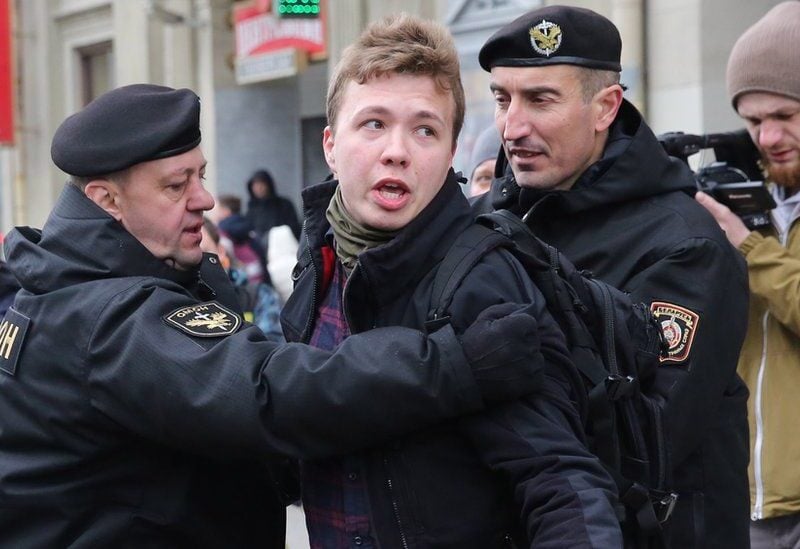 Western countries have condemned Belarus for diverting a plane flying over its territory to arrest a Belarusian opposition journalist.

EU leaders are due to discuss their response to what the union’s executive called a “hijacking” and the US state department said was “a shocking act”.

Belarus scrambled a fighter jet to force the plane – bound for Lithuania – to land, claiming a bomb threat.

Police came and took Roman Protasevich away when passengers disembarked.

The 26-year-old was aboard the Ryanair plane, which was flying from the Greek capital, Athens. The aircraft was due to land in Vilnius, but was still in Belarusian airspace when it was told to divert it to their own capital, Minsk.

State media in Belarus said President Alexander Lukashenko had personally given the order for the move. The plane landed in Vilnius more than six hours after its scheduled arrival.

Since winning a disputed election last August, 66-year-old Mr Lukashenko, who has ruled the country since 1994, has cracked down on dissenting voices. Many opposition figures have been arrested while others fled into exile.

The incident drew sharp condemnation from across the European Union, with countries urging the immediate release of Mr Protasevich and a full investigation.

The president of Lithuania, Gitanas Nauseda, urged the EU to impose fresh economic sanctions on Belarus at Monday’s meeting of union leaders. He told the BBC that such steps “could make a larger impact on the behavior of the Belarusian regime”. Dozens of Belarusian officials, including President Lukashenko, are already under EU sanctions including travel bans and assets freezes, imposed in response to the repression on opponents.

How was the flight diverted?

Flight FR4978 turned east to Minsk shortly before it reached the Lithuanian border. Greece and Lithuania put the number of passengers on board at 171.

In a statement, Ryanair said the crew had been “notified by Belarus (Air Traffic Control) of a potential security threat on board and were instructed to divert to the nearest airport, Minsk”.

But Tadeusz Giczan – the editor of Nexta, the media outlet Mr Protasevich used to work for – tweeted that agents from Belarusian security service the KGB had boarded the plane and were the source of the bomb alert.

Franak Viacorka, a friend and associate of Mr Protasevich, told BBC Radio 4’s Today program that the journalist “already felt something bad” in Athens airport because he had seen that someone was following him.

Another passenger told Reuters news agency that Mr Protasevich had opened an overhead locker after they were told of the diversion, pulled out a laptop and a phone and gave them to a female companion.

Mr Viacorka said the woman, who was Mr Protasevich’s girlfriend and was arrested with him, was “not involved at all in anything, but they will be pursuing her because she’s a close person to him”.

“It appears the intent of the authorities was to remove a journalist and his travelling companion… we believe there were some KGB agents offloaded at the airport as well,” Mr O’Leary said.

Ursula von der Leyen, head of the European Commission, said “the outrageous and illegal behavior… will have consequences”. US Secretary of State Antony Blinken condemned the “shocking act” and said President Joe Biden’s administration was “co-ordinating with our partners on next steps”.

UK Foreign Secretary Dominic Raab said Mr Protasevich had been arrested “on the basis of a ruse” and called for his immediate release. “Mr Lukashenko must be held to account for his outlandish actions,” a statement said.

Why would Mr Protasevich have been targeted?

Mr Protasevich is a former editor of Nexta, a media operation with a Telegram channel. He left Belarus in 2019 to live in exile in Lithuania. From there he covered the events of the 2020 presidential election, after which he was charged with terrorism and inciting riots.

Nexta played a key role for the opposition during the vote, which was won by Mr Lukashenko and is widely regarded as rigged. It has continued to do so in its aftermath, particularly with the government imposing news blackouts.

But he first attracted the attention of the authorities as a teenager, being expelled from school after taking part in a protest in 2011.

Mr Protasevich now works for a different Telegram channel, Belamova. He stepped in to write for it after blogger Igor Losik was arrested by the Belarusian authorities in June last year.

He was in Athens to attend an economic conference along with Svetlana Tikhanovskaya, the opposition leader who claimed victory in the election. She too now lives in exile in Lithuania.